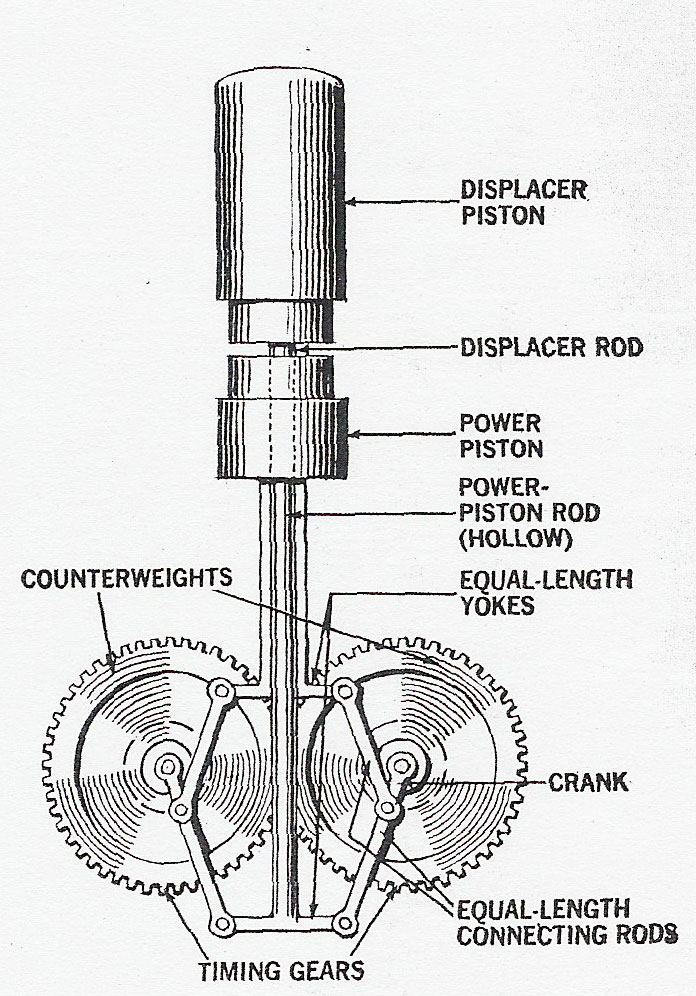 Do you think that modern technology can tease 200 horsepower out of 57 cubic inches of displacement? Wow, how fast would it have to turn and could you do it on standard fuel and would it pollute? Almost 200 years, around 1820 it was done… by a Scottish minister named Robert Stirling.

You may have heard of man and engine but to fully appreciate both read on. The Stirling engine is not an internal combustion engine… it is an external combustion (think heat) engine. Here is what Sam Julty had to say about the Stirling in 1974… long before there was the fuel and pollution problems of today.

“Unlike the Otto-cycle engine found in todays cars, the Stirling engine thrives on external combustion. That is, consumption of fuel takes place outside the combustion chamber where the power impulses are born. Thus when a constant fire is going at a steady rate, pollutants are already drastically reduced. The engine is noiseless and vibration free. It has no carburetor since fuel is fed to a separate firebox. It has no valves since fuel is neither introduced nor removed from the piston area. It has no flywheel since the engine has two crankshafts, which are turned by movement of the pistons. It has no muffler since combustion is silent and it occurs in a separate chamber.

The principle behind the Stirling engine involves the use of expanded and contracted gas working on the pistons. The gas may be steam or vapors from some exotic element. Each cylinder has two pistons, one above the other. Each cylinder has a small pipe, which runs from the top end of the cylinder to a point below the upper piston. When the lower piston, called the power piston, just completes a power stroke, it is in its lowest position in the cylinder.

At a certain point, the displacer blocks off the passageway to the small pipe, and whatever gas exists between the displacer and the power piston is trapped. As the displacer is forced further downward by the expanding gas, it pushes the power piston down to turn the crankshafts. The cycle then repeats. Note: There are no explosions driving the pistons. Rather there is merely a fixed volume of gas, which is heated and cooled. A 4 cylinder Stirling engine CAN produce 200 horsepower from 57 cubic inches.” Wow again.

BUT, you say, But is this really a steam engine? Not necessarily. Steam probably in 1820… but today we can get heat pretty quickly and efficiently from a variety of sources: atomic, chemical or electrical. I wonder who will be first to put a Stirling performer in their product? GM could use a boost.