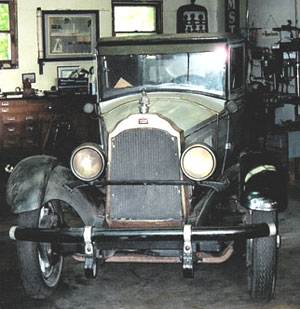 With apologies to the Timex people, here is another chapter in the 76-year-old life of this Willys Knight coupe, model 56. As pictured in the VAE 40th commemorative book as the car with the most VAE member owners it seems to have been adopted yet again.

Some history would include that fact that the Knight came to Vermont in 1954, from a junkyard in NY I think, as a birthday present to himself… by VAE founding father Peveril F. Peake. $35 and some tire work and he drove it home. As a coupe and with a heater, PF thought it would make a good winter car. With 9 quarts of oil in the sleeve valve engine it was not that good of a choice. It cranked over painfully on those below zero mornings in Bristol.

The Jewette touring car was in the garage as the queen of the Peak fleet so the Knight languished in the driveway. The first time the longest owning (to date) member saw the car, it was headed into the Lincoln Inn parking lot white from the belt molding down with Vermont road salt. When questioned about this unusual punishment Pev mentioned that it was, after all, his “winter car”. That was December 1954. 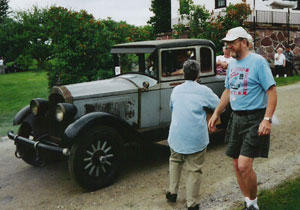 That was then. We figure that the car was driven about 100,000 miles in the next 3 plus years and consumed untold 2-gallon cans of inexpensive oil and a lot of time “on the road”. Retired to the way back of the barn it sat idle until 1996 when it was reawakened to go the owner’s 40th high school reunion. It rained so hard that it didn’t make the event and quickly went back to sleep.

This is now. Enter Charlie Thompson, the Willys, Whippet, Willys-Knight VAE member. Congratulations to Charlie and the Overland guys.

What we need now is for Charlie to tell us what really happened between the first photo and the last. I bet that Wheel Tracks readers would also like to know more about the Willys Overland Registry and their interest and activities. Call Charlie and urge him to confess.