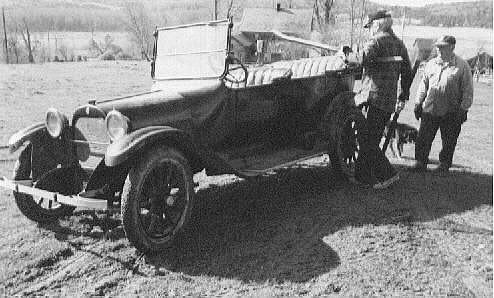 Back in April of 1988 I bought a 1922 Dodge Touring that had not been run in 12 years and had been owned by a little old lady who — wait! — No, it had been owned by Ed Rotax who had had at one time or other about every old Dodge Brothers car in the state of Vermont.

Ed sold me the Dodge that was stored in one the many little outbuildings on the farm. This one had a ceiling so low that the car had to be stored with the top down. Ed drove it to NH for a car meet in 1976, and then parked it. Ed said there would be no problem starting it. He poured in a little gas, found a very tired old 12v tractor battery (he hated to let it go with the car, but I insisted), and sure enough, it started. Silently, as Dodges with starter-generators did in those days.

It had only one flat tire (after 12 years!) We pumped it up, put the top up, found the back bumper for it, and I was good to go to drive it the almost 4 miles home. I did eventually put new tires on it, the others seemed pretty original with Non-Skid tread and red rubber tubes. Ed asked for them back when I got the new ones. (I saved one for a spare.)

The main part of this story is coming up, though. Number 698132 is in mostly original condition. It was “repainted” (brush) some time in the late ‘40s when the top was put on, but the rest is pretty original. It was sold (I have the order form) for $995 (cash) by Bishop, McCormick and Bishop’s Dodge agency in Queens, NY, a stone’s throw from Broadway in NY City. They were still in the Dodge business as late as the 1960s. How that car remained pretty much untouched until Ed bought it off a truck in Albany, NY, in 1954 I don’t know. Untouched, but not unused. It’s now an 84-year old car. There are fender wrinkles here and there, a dent or 8 or 10, worn linoleum, tired leather upholstery in places, but mechanically it looks as if it has never been apart in the two or three times-around-the-earth mileage I think it has on it. It’s going to stay that way. You just can’t restore them to that condition. It’s a strong runner, and thereby hangs the tale.

This Dodge Brothers car would run beautifully for 3.9 miles, then stutter and quit during that last tenth and roll to a stop. (I lived in North Ferrisburgh then so all this took place on dirt roads—not Route 7 or 89.) The first 10 or 12 times this happened, I figured it is an electrical/gasoline problem. You know it takes only electrics, gas and air to make a motor run. I figured the air was okay.

A car that has problems sure helps to get you rapidly acquainted with its components. Over a six-week period I checked spark plugs, wiring, terminals, (new) coil, rebuilt the starter switch (it did poop out), cleaned the fuel system, and made new gaskets for the vacuum tank. (I wore out the old ones taking it apart often to see if it was the culprit.) Still a 4-Mile Car.

I consulted Ed Rotax. Ed is stumped. (First time in 70 years, he said.) I took the carb apart lots of times. Actually once a float had given up. That’s part of the problem—once in a while a real problem would show up. But not THE problem.

“There! By Jeezum, I bet that’s fixed it!” I would holler, and my wife would hop in and away we’d go— for about 4 miles. She would walk home and get a tow vehicle; the neighbors would snicker (again) as we rolled into the yard joined by our nylon umbilical cord. It runs so well! The best vacuum tank in New England, and cleanest carburetor. A perfectly timed hot-spark, smooth idling, 65 lb compression 4-cylinder engine. We can go anywhere in it. But not over four miles. Things hit a new low when I got towed home (backwards) by a neighbor with his little John Deere garden tractor. Even the dog was ashamed.

It took a while to figure out that it was a modern problem in an old car. Then one time it stopped and I was quick enough to raise the hood and hear the gurgle. HEAT SOAK! FUEL BUBBLE! What the hang was it called? VAPOR LOCK!! EUREKA!!!

Today’s gas has many lighter ends than the gas of even the 1950s. It is much more volatile, so vapor lock can be a real problem in old cars. A piece of aluminum flashing to shield the carb and gas line from engine heat was all it took to solve the Dodge’s problem. Now that smooth tucka-tucka-tucka from under the hood will take us anywhere past the 4 Mile Limit we want to go–as long as it is under 40 mph and on a back road.