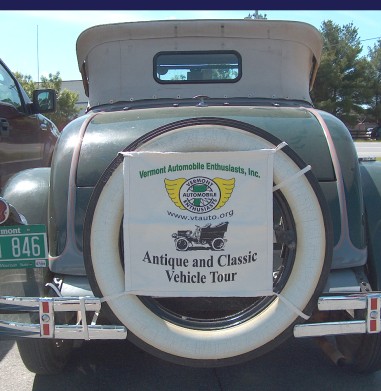 As you can read from Bill Sander’s minutes of the Saturday meeting it was just about 20 minutes in duration. My kind of meeting.

Saturday, July 11, 2009
There were 14 cars on the tour that went to Plattsburgh, NY for lunch at Geoffrey’s Pub and then on to the Champlain Valley Transportation Museum which is housed in several buildings on the east side of what was the Plattsburgh Air Force Base.

After the meeting, we arrived at the Ferry Dock and as I was the lead car, I told the ticket taker that we were a automotive tour and that there were 14 vehicles of various makes and models on the tour.

They managed to get us all on the same Ferry and we enjoyed a ride on the lake who’s founding we were celebrating.

In an effort to get a good photo of the cars, I asked the attendant if I could get permission from the Captain to come up to the wheelhouse in order to get an overhead view. He readily agreed. As I stopped by to thank him on my way down, what to my surprise should he pull out of his travel bag, but a current copy of Hemming’s Classic Car magazine. (Remember folks, they are out there, we just have to find them.)

We got to the Pub in good shape and were treated to a fine lunch at reasonable prices.

A short drive later, we were at the museum, where we met our tour guide Richard “Dick” Soper a very knowledgeable local volunteer.

After our introduction, we started the walking tour which last a little over 2 1/2 hours. As we were all standing outside commenting on how enjoyable and informative the tour was, in the not too far distance, many heard thunder. A harbinger of things to come – in buckets!

Hastily, decisions were made and plans were changed as a number of members decided to head back via the Ferry and not to complete the tour as planned.

An intrepid sextet, lead by 2nd. VP Wendell and Mary Noble in their 1930 Dodge Brothers roadster; Gael and Judy Boardman, in their 1917 Locomobile; David Stone in his 1930 Ford Model T Sedan, Don Lovejoy in his 57 Chevy, Joe and Judy Paradise in their Triumph and Clark & Isabel Wright decided to follow the original planned route and headed north into the ominous oncoming storm. In the meantime, Judy Boardman lost her hat so an unscheduled stop was made. Due to the design of the Nobel?s roadster‘s top, Mary had to literally hold the convertible top down while Wendell drove.

There is no doubt, that as time goes on, the rain story will be enhances and grow exponentially and sound something like the story of the fish that got away. As Gael pointed out in no uncertain terms, the 3 oldest cars did it! Congratulations to our intrepid drivers.

July 12, 2009
Seven cars met at the Shaw’s parking lot in Colchester and proceeded down Spear St. (to bypass Shelburne Rd.) toward Basin Harbor and the Maritime Museum.

Again your scribe lead the way and I was told that I was going too slow. True there was a parade of cars behind us so I went a little faster.
As we did the day before, we ate lunch first at the Red Mill located right on the airport of the Basin Harbor Club and enjoyed another fine meal at good prices.

As we had let it be known that we would be happy to join up with other like-minded enthusiasts. Our group was met by Dave and Joyce Silveira (members of the Vermont British Car List) with their sparkling white MGB.
We were also met by two former VAE Presidents who were dining at the Red Barn. Rod and Betty Jean Dolliver in their 1931 Model A Roadster Pick-up (Which by the way needed some human intervention to start it-the guys pushed it.) and Larry and Mrs. Johnson driving their Woody Station Wagon.

After our lunch we formed up and toured the Basin Harbor Club’s grounds and received may whistles and applause. Kind of a mini-parade. Then we were off to the Maritime Museum down the block.

A grand visit to some Vermont nautical sites. Another great day.
We are all back home tired but safe and sound after an enjoyable tour of the lake and celebrating the founding of Lake Champlain.

A very special note of thanks to Wendell and Mary Noble for putting this program together. Cheers and well done folks!

On the following page you will see some of the 150 photos of the tour, It was grand fun and we missed all who could not attend. We look for more tours in the near future. So, keep tuned and plan on coming even if your classic is not running.

Now for a surprise: Everyone who was on the tour will receive a CD of all the photos that I took (about 150), as well as an 8 X 10 photograph of their appropriate group. If you were in 2 groups you get 2 8 X 10’s, with my compliments. (gf)