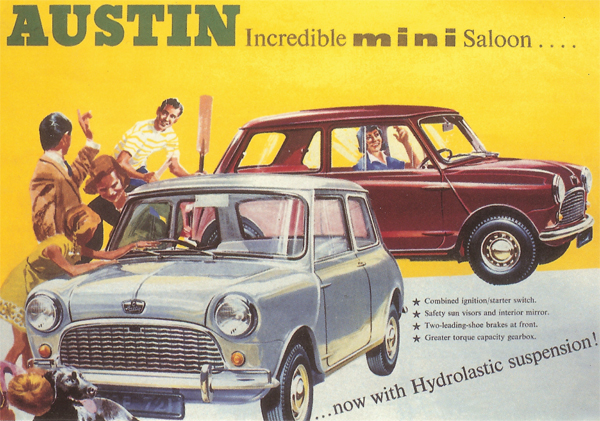 Some time back my wife Judy saw and admired the new BMW resurrected Mini Cooper. She likes small cars and really liked this one. “It shouldn’t be that expensive”… she thought… but it was. Admittedly they were kind of neat I thought… but quite beyond budget. “How about one of the originals?”, I suggested. They can’t be that much. Driver John Buffam brought a brand new one, in the 60’s, to our VW dealership to be “set up” for rallying purposes. VAE Friend and rally master Bill Moreau was a mechanic there at the time and it was his interest that got the car delivered to our shop. Bill did great work on the car… except for the “Hydrolastic” suspension. Wow. He did something and the car collapsed on the shop floor never to rise again. Several days later we quietly rented a trailer and took the darn thing to a shop in Montreal where they quickly fixed the problem. We spiffed the then-ready car up and delivered it to John who did quite well with it on the rally circuit. I think that Bill went along as navigator, not as a suspension mechanic, and the team became Canadian champions. Should I look for one of these “originals” for Judy? I checked Hemmings. They are kind of neat, I thought… but they too seem now, to be “quite beyond the budget”. And then there is the “Hydrolastic” thing. With Bill living in nearby Waterbury there might be a risk.