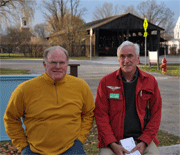 The two gents pictured to the right have agreed to co-chair the event that will take place the first weekend of June. Bill Fagan (left) and Ernie Clerihew have already started the planning stages, we could not ask for a better pair to lead the VAE into this new venture. It should also be added that they are very early in their planning stages and the wonderful poster on the front page is just a trial balloon… but a really nice balloon!

Bill is a long time VAE member with an “old car habit” that goes back to when he was 5 years old. He purchased his first car at 16 years old. The ‘29 Ford fordor* was driven for 25 years through his high school days, summer jobs, college at UVM and for work at Pizzagalli after he was married. He has a wood shop and small machine shop where he can do much of the work on his old cars at home that range from a 1910 Stoddard to a ‘67 Austin Healey…his favorite. He says he has had the Healey for 33 years and in the thousands of miles driven, it has never let him down.
Bill helped out when the VAE had the Essex Car Show and as he said “ I feel it is time again to devote some of my energy to the club”. He says this seems to be a perfect opportunity, as he has always enjoyed the Shelburne Museum and he said the potentials here are enormous. He is hopeful that we can offer an event that will involve the entire family; he feels it is very important if we expect to continue to attract young folks to our VAE club.

Ernie Clerihew, if you remember, is the gent who celebrated his 1914 Model T’s 100th birthday this last summer by driving, with his family, to its birthplace in Detroit. Asked what his favorite car is and he replied, his 1914 T would be it, although he said its like being asked which child one likes the best. About his Detroit trip, the 35 MPH he liked very much and above all, he said every person they met was their friend. Again, Ernie said he has the ability to do most of his old-car-work at home except for the few things he would rather send out to have a better job done then he could do. Ernie said his dream car would be a Baker Electric… maybe someday!
Asked why he decided to co-chair the Shelburne Show, his answer was that he likes the opportunity to mingle with old-car minded folks. He said he attended one of the Shelburne car shows years ago and realized then what a great venue it is…so he said “lets do it again”!

According to past Wheel Tracks publications the first co-chairs in 1996, for the Shelburne Show was Bill Erskine and Tom McHugh. In 2001 Tom McHugh remained and Dick Currier took Bill’s place. Then in 2002 Bill Erskine was back with Avery Hall and research was difficult until 2004 when Ellen Emerson and Nancy Willett became the co-chairs. Wheel Tracks was unable to determine the co-chairs in 2005 but the final year, 2006, it is published that Ellen Emerson and Jim Willett took the helm. Throughout this bit of research its amazing the many volunteers who showed up to do the work. Like the VAE show in Stowe, it seems like magic as folks start appearing to lend a hand but we know it is not magic, it is dedication and huge hearts that make successful shows.

As for the Shelburne Museum and why the VAE has been able to make it’s way back after all these years… There are two “shakers and movers” we need very much to say Thank You to.

Tom Denenberg was willing to listen to our requests for a car show at the museum and sees the many great possibilities. He is the museum’s Director.

Jeffrey Bundy is the museum’s Director of Development and he will be the museum’s main-guy to make the show this June a success.

*What is a “Fordor”?… research says it is known officially as the Ford C11ADF, Station Wagon/Heavy Utility, 4×2, was a militarized station wagon used in World War II in North Africa. They often had roof hatches and sometimes had the roof completely removed.

Wheel Tracks was unable to find an earlier flyer but this 1998 example tells it all. Maybe a member could tell us who might own the beauty of a car and what make and year it is. At press time we had word from Bill Fagan that they had recently had a planning meeting and this is what he wrote:We had a meeting on Monday (Dec. 1st.) and actually decided on a few items. It is going to be called ““The Shelburne Museum Vintage Auto Festival”. It is open to All Vehicles regardless of type or age; cars, trucks, street rods, customs, motorcycles, tractors and late models. There will be no judging, but there will be some awards yet to be determined. There will be a brochure put together and mailed out. Pre-registration will be $25, at the door is $35, both entitles 4 people to the show and museum for the 2 days.

After the first Shelburne Museum event in 1996 with it’s great weather Bill Erskine reported that… “it was a very successful show”. He quoted the Best of Show winner saying that he had been in 20 years of car shows all over the East coast and this was the best car show he had ever been to. One of the main reasons was the “spectacular setting” that the Museum offers for displaying the cars.

The ‘96 Wheel Tracks editor, Christine Skinner, said this at the time… What a way to start a season with the Shelburne Museum Show! Great place, great weather, great people and lots to do for the whole family. I should know! I think my kids rode the carousel for hours. There may be a few things to change but the idea of having a show there was a good one. As for me, I hope the trolley will run next year; there was a lot of walking for little legs! ( I’m not talking about mine, don’t worry) I loved watching the European cars by the train station; it was picture perfect.