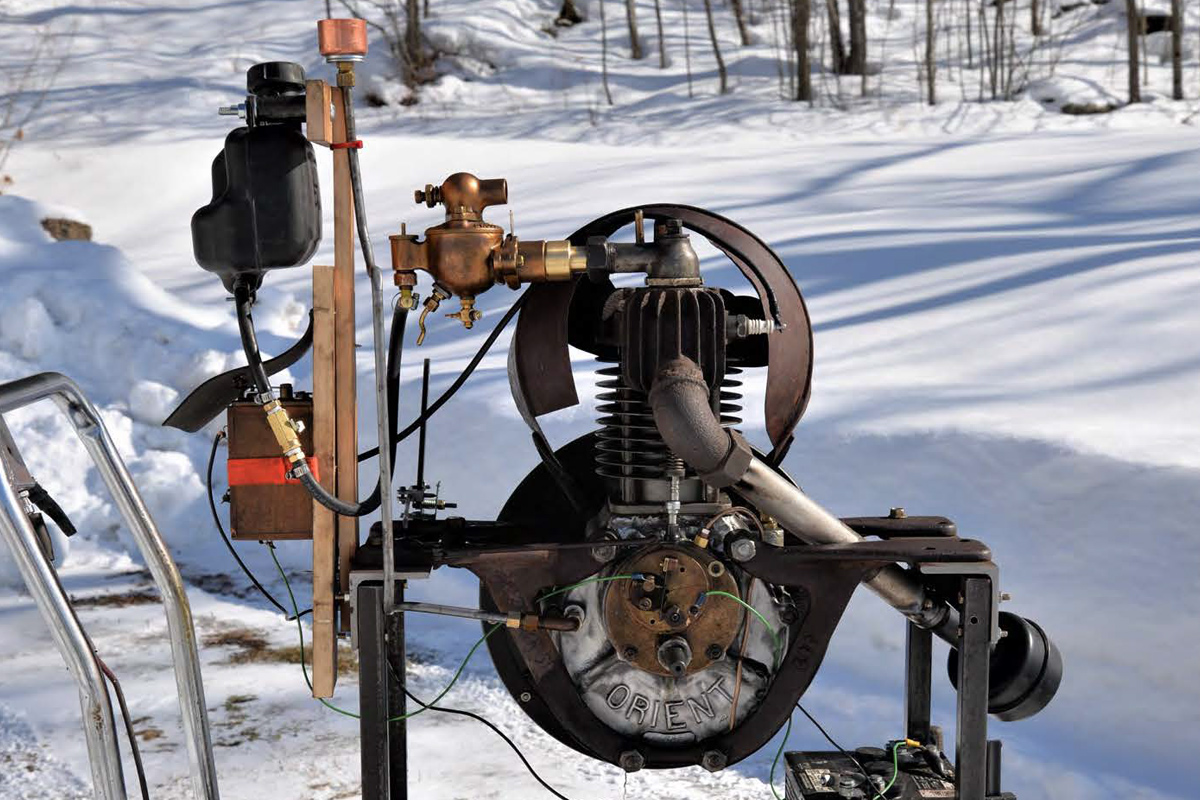 I am finally running again! Some say it has been sixty years. Others say closer to 85 years.

Good Morning…. I think this is called “first person”, when it comes to writing style. Well, this a little different and I am calling it “first engine” and I will be telling you this story.

My owner is Gary and Nancy Olney of Derby Line in northern Vermont. Gary’s dad, Harry, found me in the 1950s, in a barn, in Antigonish, Nova Scotia. I spent many years in that barn with a Studebaker that was 6 years younger than me. My memories of the years before Mr. Olney found me, are very fuzzy.

I do know, I did not start out life on the 1906 body that is waiting for my installation in Gary’s barn, because my exhaust is different from the ’06s. Theirs point toward the right and mine shoots straight back. We know the body is a 1906, because of the controls. I also know I have not run in a long while, because I have found I had a very rough life in the old-days.

A while back, Mr. Olney made a deal with a restoration shop in East Fairfield, Vermont that is run byMr. Dennis Dodd, and you would not believe what he found. My cylinder space that my one piston was in, was egg-shaped! That is the main reason, Mr. Dodd believes, I had not run, since at least the 1930s or 40s, because my compression could be nothing more than zero in this condition. When Mr. Dodd finished with me, I now have a compression of 84 pounds, not bad huh?

My connecting rod was twisted and bent, and my piston was broken into pieces. My exhaust valve was shot and the seat needed to be bored out completely and replaced. I am now sporting a Caterpillar valve with a brand new seat and feeling very macho! All of my bearings were bad and have been replaced with new ones made of bronze. It was scary, but a shop by the name of RPM, was able to bore the egg-shape out of my cylinder and Mr. Rick, at RPM, found a 1940s Dodge cylinder, and new rings that fits me perfectly. Mr. Dodd did have to rework the piston a bit. The skirt had to be cut off and the wrist pin needed to be relocated a little lower because the piston was not going up high enough.

My head was warped and that got fixed. I have two balanced flywheels and guess what…I was way out of balance and my main pins were toast. After some mill work and some time in a special jig made just for me, my balance is now perfect. I have a brand new push rod so the fuel and exhaust can work the way they are supposed to. And, speaking about fuel, my old carburator is now in a box. It never worked good even when it was new and after many hours, Mr. Dodd decided to put on a really nice Schebler carb, I now purr like a kitten.

Mr. Dodd balanced the face of my transmission real nice. Someone had repaired the disc at one time and made me jump a lot when I was going down the road. About the only thing I had going for me was my timer. A little cleaning and adjusting, and it was ready to go!

There is a story from my fuzzy past, when a jeweler in Nova Scotia owned me. They say he was a very pious man, but would use lots of swear words while getting me started. I had lots of problems even back then. All I need today is a tickle on my new carburator and a half turn of the crank, and I am ready to go to work.

I would like to thank Gary Olney for sending me to the shop, and his wife Nancy for her patience (not with me, but with her husband). Mr. Rick Paya at RPM for his professional attention and Mr. Dodd for his not giving up on me. A gent by the name of Skip Minor was also at the other end of the phone line many times when Mr. Dodd had trouble figuring me out. Skip is a master at motor cycle engines and that is basically what I am. I will see you in the movies.