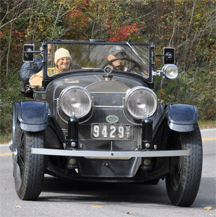 In the early 1950’s the Goodyear Tire Company would publish a 2-page centerfold advertisement in the Saturday Evening Post showing a pictorial history of cars with Goodyear tires.

These were great little pictures and my most favorite was 1925… a Locomobile Sportif. I copied and recopied this picture a lot (The Jordan also caught my eye and I could tell you a Jordan story from some years later).

Later, in 1959, I acquired an ALF fire truck for $275 (another story) and it ran like a champ, 825 cubic inches of 6 cylinder T-head with 4 inch straight exhaust, twin ignition and enough radiator to keep it cool. Wow! Who designed this wonder? Andrew Lawrence Ricker did, earlier, for Locomobile. So, I began a hunt for a Locomobile. John Hawkinson, an early VAE mentor showed me one he had rescued for Albro Case in West Hartford, CT. His was a handsome brougham sedan but not the Ricker engine – and it really wasn’t for sale.

In June of 1960, my new wife and I detoured from our wedding trip in Maine to greater Philadelphia to look at another. It, too, was a later sedan, small Series and had been in a fire…not too bad, puckered fenders and hood, but running, and not expensive. Judy, new wife, wasn’t impressed and I got over it quickly.

20 odd years later, I was bemoaning this history to Steve Dana and he said, “Do you want a Locomobile?”. Dumb question! He said H.M. Burrows in North Springfield has several and would probably sell one. I was aware of Mr. Burrows, as we had mutual friends, but had never seen his cars. This story begins to sound like one recently published here by Rusty Bolts.

Rusty’s story about Fred Gonet and his wonderful 1908 Locomobile echo’s my own experience with Henry Morris Burrows. I went to look at the cars and walked right past the 1908, a 1911 Loco, a Mercer race-about and a 1915 Mercer roadster. There was also a Porsche 911 and a much later special order Chevrolet 2-door. Mr. Burrows needed room in his garage and the 1918 Sportif took up a lot; twice as much, as he had scattered it all over the shop. He loved to inspect things as Rusty explained. We sort of negotiated and it took several interviews and a “home visit” so he could check our home and family to assure a secure adoption. We finally “passed” and I sold my really nice 1950 Cadillac convertible to fund the venture. That, and a little help from VAE member Bill Billado who was a branch manager at the Chittenden Bank. I sold Bill his 1935 Buick convertible sedan as one of his first cars. I went to present payment and Mr. Burrows said, “Oh, and did I mention the spare engine? That’s another $2500.” Oh no! Well, somehow we robbed the egg money and it was all mine! The car came home in the early ’80’s in pieces. It took me years to get it together and help from now “cousin Fred Gonet” to get it properly timed and running well. You see, some years later Fred auditioned for and got the Model E 1908 for himself. The 6 cylinder T head in my model 48 is the 525 cubic inch inspiration for the just bigger 825 edition in the ALF…same stuff, same power, same noise and better with a Frank deCausse Sportif body. The factory slogan was “easily the best built car in America” That’s why a Locomobile.