I’ve been giving this, my first article for Wheel Tracks, some thought in recent weeks and with that a lot of reminiscing. 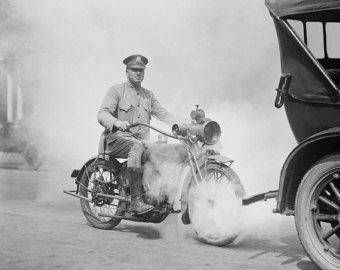 It all starts with my first encounter with my husband Gael and his 1937 Packard many, many years ago. Then Peveril Peake enters the picture with his 1956 VW Bug. I logged more than a few miles in the back seat of that car, often wrapped in a blanket. Fortunately, Pevie always had to stop for coffee and a meal or two. I had no idea where we were going or what we were looking for in many of those rides. One trip took us to upstate New York to visit John Hawkinson. I do remember a delicious German meal we had on the way. We might have been in a Hupmobile that time.

Then there was the firetruck that Gael and Mahlon Teachout bought in St Albans. We hadn’t been married more than a few weeks and Gael was always disappearing to some shop to work on this project with Mahlon. I don’t remember that sitting so well with me. But in the end, when the firetruck became a speedster, it was fun to see and ride in, or on.

I do remember Mahlon and I taking it to Stowe for a car meet one year, 1961. Gael had to work and met us there later. I watched the chain drive something and just hoped the chain wouldn’t break and decapitate us.

Then there was the 1927 Chevrolet (named Edward) which was actually easy and fun to drive. I don’t think it was legally registered when I stalled it on a hill at a red light in St Albans. I hadn’t been driving too long. A policeman came to my assistance and saved me. That could be another article, driving cars that weren’t registered or inspected and how easy the inspection stickers were to remove and put on another car. License plates were duck soup. Actually, I think our kids could add some stories of their own along these lines.

I will never forget seeing Steve Dana driving down our road in his Kissel and his dog sitting on the seat next to him. What a sight. Another article might be about the Volkswagons that we drove over the years, including the Thing that seems to be back in our barn. Maybe I’ll even get to drive it next summer, if the shifting gets easier. The top needs to be replaced, but the family drove it one summer without a top, rain or shine. We did get some funny looks.

Oh my, the more I think about the stuff we drove, the more stories I have. And, I don’t think it’s over yet. Thanks, Gael (and Pev, Maholn and Steve).