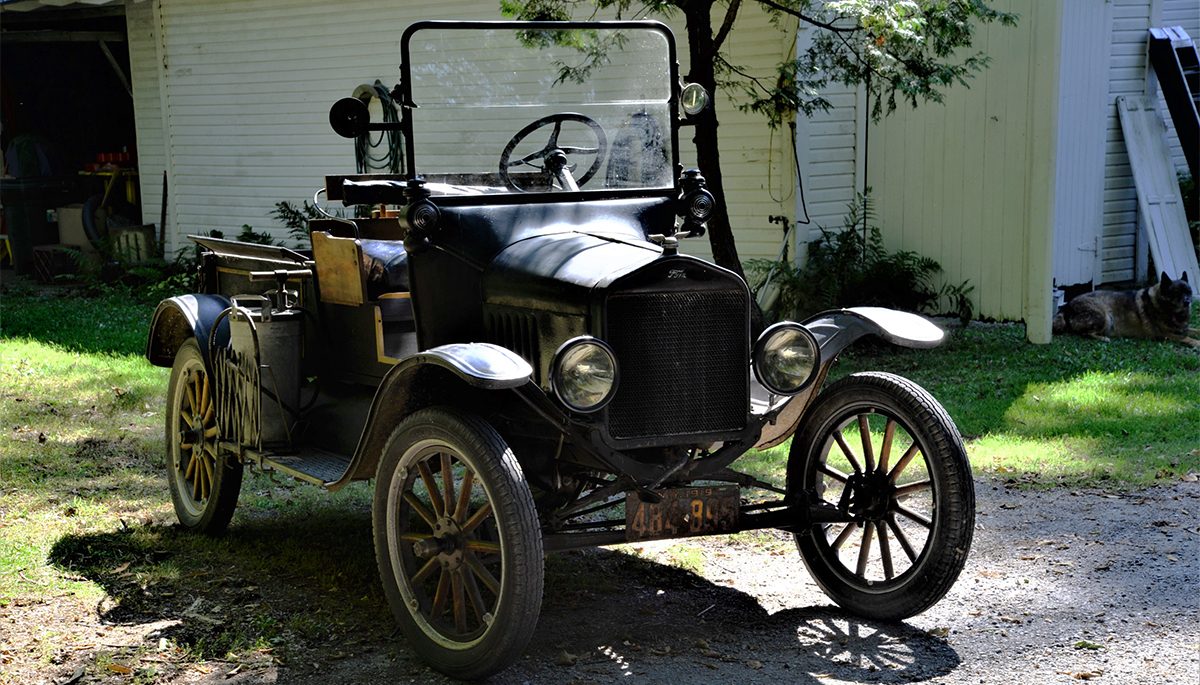 Tin Lizzie, Leaping Lena, or Flivver is a few of the names for Ford’s Model Ts.  Dave Welch’s 1919 Model T, above, fits these names. 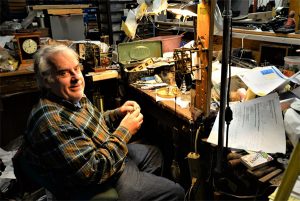 David Welch has a clock shop in the old Kennedy Brothers building in Vergennes and has been in the repair business for many years. He is also “the cook” according to his 90+ year dad, Steve. Dave and his dad live together. When asked the time that Dave gets home from work at the Clock Shop, Mr. Welch replied that he hoped by five PM, because he is the cook. They live in a wonderful area along lake Champlain, where the extended Welch family have lived for a number of generations. 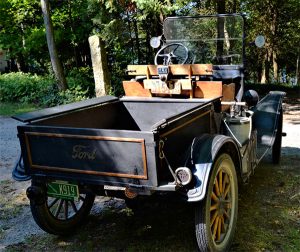 The Model T has spent over 35 years owned by VAE members, starting with Ed Rotex. Wheel Tracks understands Ed “just ran the T around once in a while”.

From Ed the car went to Tim Hunt, then to Ed Welch. The last 30 years the car has been in Carl Tatlock’s garage, who gets credit for many of the upgrades on the vehicle today. The story goes that Carl is a stickler for detail, the proof is this Model T.

The next home for the T is Mr. David Welch and the way he acquired the car can only happen in the VAE. Carl “gave” it to Dave, a gift many of us only dream of… a fantastic gift. 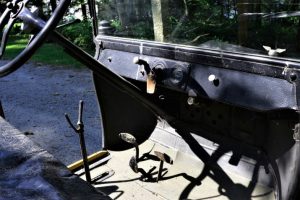 Wheel Tracks has found some mysteries and solved some mysteries with this old T. It is known that the 20 HP engine is not original to the car, but no one knew the year. Research has revealed the #13669202 engine was built in May of 1926.

*The big surprise was when the car was built, it turns out, it is not a 1919 Model T! Ford numbered the engines when they were built and when the engine was placed in the car during assembly, the frame was stamped with the engine number. The frame on Dave’s T is #8893000 which tells us the car was built in December of 1923. The vehicle number and the factory production number is the same, so this car was number 8 million, eight hundred ninety three thousandth that Ford had made by that date in 1923. The 9,000,000th was completed at 1:05PM on December 26th, 1923.

The Model T Club of America publishes the total number of Ford model Ts built was 14,689,520 when they closed down the T line in 1927 and started building Model A’s. Model T engines continued to be built through 1941, for an additional 169,856.

Wheel Tracks can not find what this car started its life as. Was it a touring car, a runabout, or a coupe? Or maybe a Tudor or a Fordor or even a truck? Are there any T folks out there who can help?

Here is some additional 1923 information from the T club….. The “1923” touring car style was introduced in September 1922, with a one-man top and sloping windshield, but otherwise the body was the same as the 1922. The runabout followed about November, with a new body and turtle deck as well. A new “Fordor” sedan appeared in December 1922, which used aluminum panels throughout the body. The cowl section and lower body section were changed to steel during the year. There was no cowl vent in the early Fordor sedans but the vent was added during early 1923, before the change to the larger hood. The Coupelet and Sedan (Centerdoor) continued into 1923 with minor modifications that were introduced in 1922, but were both replaced with the new Coupe and Tudor Sedan in August 1923. The front section of the car was revised about August 1923, with a new and higher radiator, larger hood, a valence under the radiator, and revised cowl section to match. These cars were generally referred to as “1924” models in Ford literature. The Coupe and Tudor Sedan were all new, with coupe doors opening at the rear. Body construction continued with the metal panel over a wood frame design.

* This paragraph could have problems…..1. If Ford sold just the engine, then there would be no chassis to stamp. 2. Wheel Tracks took the chassis number from the cars registration form, not the chassis, there could be a different number on the chassis.