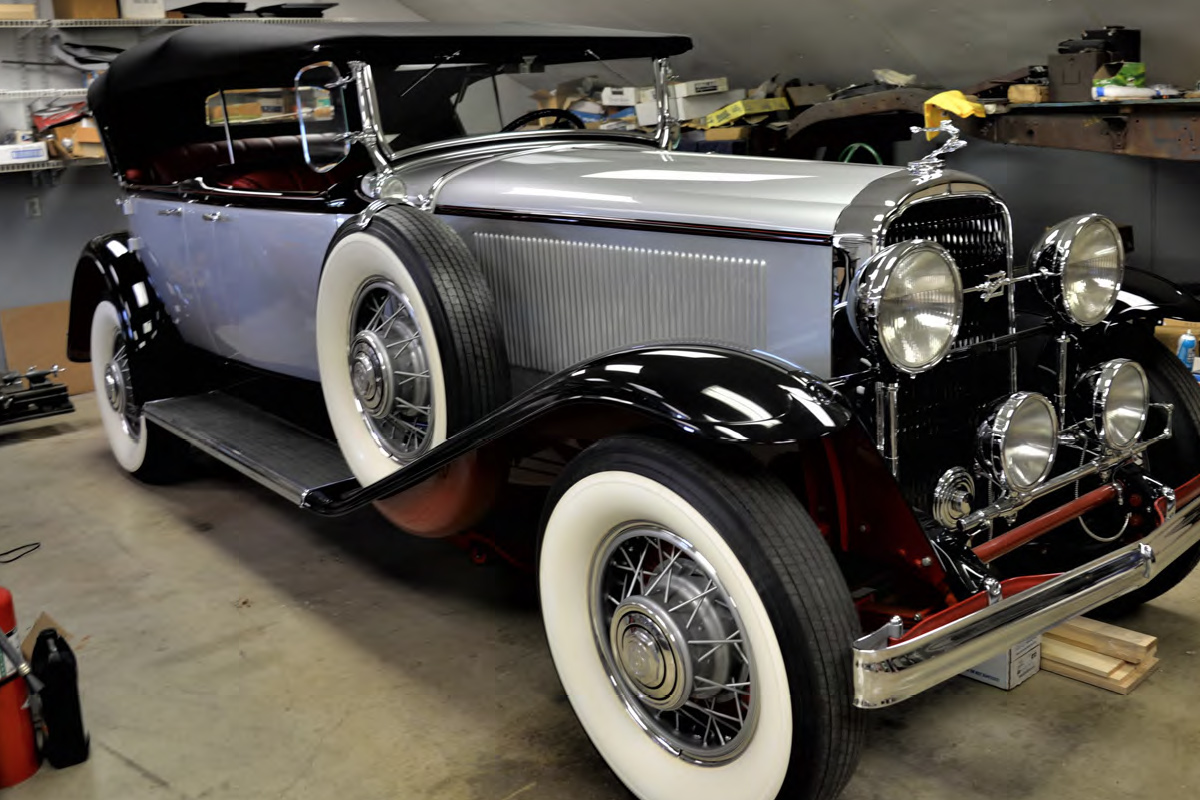 From what you see to the left… To the “Buick Beauty” above…. With just two flicks of Bill Billado’s fingers! Well, maybe not just 2-flicks of Bill’s fingers….

Bill Billado’s Buick project really started, some 40 to 45 years ago. Dale Lake was a VAE member from the early 50s. He lived in the house he was born in, on a mountain road in Ripton, not far from Middlebury, VT. Over the years, Mr. Lake had accumulated a good number of old vehicles in and around his barns, across the road from his home. One of those vehicles was Bill’s 1931 Series 91 Buick (sitting outside). Dale Lake’s VAE titles back then was “Mr. Buick”.

“As time passed, things changed in Dale’s remote neighborhood. Folks from “down-country” started buying up parcels of the beautiful acreage and when in sufficient numbers, they decided that they were not impressed with Mr. Lake’s hobby interest, so the battle began. As you can surmise, Dale was not the victor in this legal scrap.”

The story goes on to describe a VAE gathering where Mr. Lake made a “tearful plea for the membership to ’come and get ’em’ before the crusher deadline arrives. Bill described the summer where every single weekend, good and bad weather, the gang was at Dale’s place, competing and negotiating for his “Old Iron”. The gang included Bill, Tom Beebe, Larry Johnson, Doug Kelly, Roy Martin, Kip Matthews, Tom McHugh, Rod Rice, Gardner Spencer, Ray Unsworth, Al Ward, Ed Welch, Clark Wright, and probably others. Gail’s column describes a side benefit for the “gang” that summer was Dale Lake’s story telling and tips on caring for old vehicles. Mr. Lake always drove old vehicles, some that might not be pretty to look at, but they were all in tip-top mechanical condition. Bill said Dale Lake’s property was cleared of “old Iron” when the gang was finished. Gail Boardman’s 2003 Wheel Tracks column was written after Mr. Lake’s passing.

The next period of the Buick’s history was Bill Billado’s description of its ride north, from Ripton. Tom McHugh had purchased the Buick from Dale and a few of his friends had helped him load the many parts and pieces of the Buick onto a trailer. Bill writes……

“It was so fragile that it was necessary to tie the rotted wood body to the chassis with rope before setting out on the trip north on the back roads (fewer cops) to Burlington. The car made it all the way to Charlotte (just north of Mt.Philo) when the web of rope called it quits. All hell had broken loose with 4 doors and the rest of the body panels spilling out all over the road. The crew consisting of myself, Tom, Tom’s brother Joe, Clark Wright and Kip Matthews managed to re-load the pieces, haphazardly, back on to the chassis and we then re-tied the whole mess. We decided at that juncture to take the car to my place in Shelburne (without wife’s approval). The chassis was dragged into the woods and the body pieces were then transported to Tom’s place. The car then did a Rip Van Winkle number until many years later.”

Bill says, to this day, some great memories come back every time he passes that area near Mt. Philo, the day the Buick was spread onto the roadway.

After many years with part of the car at Tom McHughs house and the rest in Bill’s woods, Tom asked Bill if he would like to take ownership of the Buick. That is when the restoration phase began.

General Motors in the Port Elizabeth plant in South Africa had reconfigured one Series 91 Buick into a “dual-cowl phaeton in 1930 and that is what Bill decided he would like to do to his ‘31. The only difference is theirs was based on the 6-cylinder engine and Bill’s is based on the newer 1931 straight-8 model.

He drew one eighth scale drawings of his dual-cowl idea to see what it would look like, then began the project. Fourteen inches was added to the frame and the body was shortened by 1/4 of an inch to accommodate the “close couple” rear seat area. He said there were too many great businesses involved to list, that helped him create the Buick that we see today, but one key business was the Auto Shoppe in South Burlington.

The level of detail in this automobile is amazing, and we doubt there is not a detail or measurement that Bill can not give you from memory today.