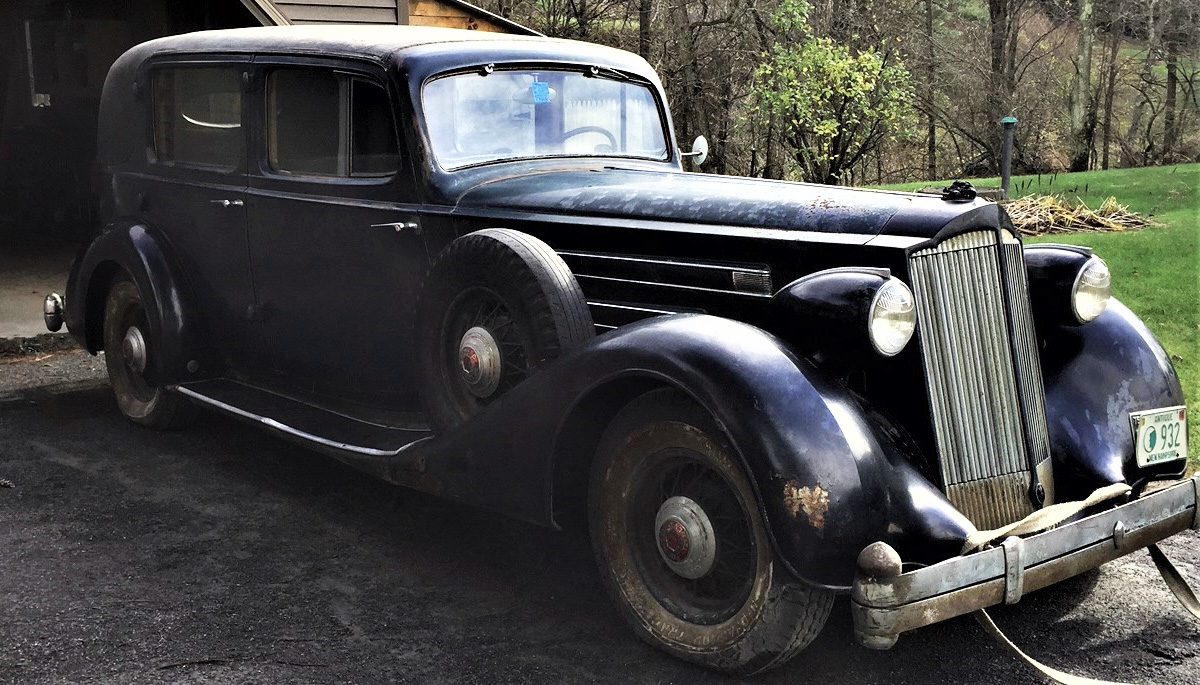 I think the best way to tell the story of the car is in two parts – first the part I know is actually true, and secondly the part that might be complete bunk…

The car is a 1935 Packard V-12 limousine that my grandfather, Bert Pulsifer, acquired sometime during the 1960s from a man named Charles Barnes. Charles was renting a house from my grandfather at the time and, having run out of money to cover rent, offered the car in lieu of of rent. My grandfather was a collector of cars and took him up on the offer. He kept the car and entered it in local parades from time to time and my Uncle Scott drove it occasionally- although I’m guessing a V-12 limousine wasn’t something anyone could afford to drive regularly even then! I do remember it sitting in the garage at Grandpa’s farm and pretending to drive it when I was little – as a kid that was the most impressive car in the world!

I also remember the whole family washing and waxing it in preparation for a parade. This must have been done many times because even then the paint was worn through in places. The parade I remember best – and I think it was the last time it was driven, was in 1982. The Packard had a tendency to vapor lock and I recall it did it at least twice that day. The first time was at a gas station on the way to the parade. We had stopped to fill up, but couldn’t get it to start after. Fortunately, one of Grandpa’s friends was also on his way to the parade, with his similar vintage Jaguar, and offered to push start the Packard with it. This worked and we made it to the parade.

Unfortunately, we didn’t make it THROUGH the parade. About halfway through, she vapor locked again and had to be pushed aside to let the rest of the parade go by. I’ll have to dig out the picture of me, with my Grandpa’s Mason’s ballcap on, leaning against the fender, waiting for it to cool down. My grandmother wrote on the back “Thomas guarding the Packard”. (This picture never made it to Wheel Tracks). 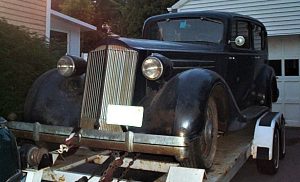 When Grandpa passed away, he left the Packard to my Uncle Scott. Uncle Scott didn’t really have a good place to keep it, and knew that I had always admired the car, so he gave it to me. I’ve had to move it a few times since then and it has remained my “someday” project that I plan to get going as time permits. The first project will be to get the gas tank cleaned/rebuilt – 30 year old gas does some bad things to the inside of a gas tank!

The part of the story that might be bunk, is the detail of Charles Barnes – I was always told that Charles was of the “Barnes and Noble” Barnes from Rhode Island. Apparently he was the black sheep of the family and had a girlfriend that the family did not like or approve of. The family told him he needed to leave the family estate, but that he could take any car he wanted as long as he left and didn’t come back. The car he chose, of course, was the Packard. He headed north and ended up near Plymouth, New Hampshire and began renting the house from Grandpa.