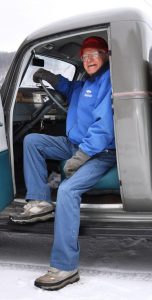 When I called Mervin Wells to ask if I could feature his Hudson Big Boy Pickup for Wheel Tracks this month, all I knew was what is entered in our 2011 Roster. A couple of phone calls later and a visit to Marshfield and presto, I have met some of the nicest folks you can find in all of Vermont.
Merv and his wife Clara live in the Winooski River Valley just south of Marshfield in the farmhouse his folks had and where he grew up; a beautiful valley, even in the middle of winter without our normal snow. Merv is 90 years old and they have been married 67 years, he was a plumbing and heating specialist and Clara a bookkeeper at Goddard College for many years. Their daughter Betty claims the reason for her parent’s great health is Clara’s cooking skills, she has a degree in nutrition. Merv was a drummer in a band back in the 40s and even though Clara’s folks wanted her to “stay away from that drummer”, they finally did marry and raised a family of four boys and two girls, which has led to some 33 around the Thanksgiving table with 5 missing. 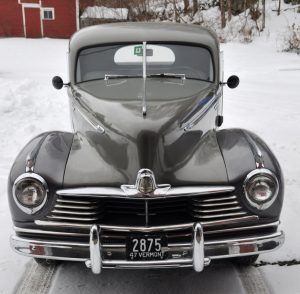 Now to the Hudson… Merv purchased the Big Boy in Florida 27 years ago from Ralph Adell. The truck needed a lot of work and restoration but Ralph told Merv he would have no problem driving it home to Vermont and that is what he did, with his son following behind. Years earlier Ralph had found the Hudson in a Connecticut woods and needed to clear trees that had grown up around the truck to get it out. Once the Big Boy was pulled out of the woods Ralph added a battery, gas and oil; started it with no problem and drove it to his home in Pennsylvania, a tribute to 262 flathead 6 cylinder engine. I also heard that engine running and some could say the sound could be close to music.

Merv has since painted the truck in the beautiful two tone grey that you see in the picture, reworked the wood and added many new parts including all new tires. Parades in the area have included Merv and his Big Boy for years but since a small stroke a few years ago has limited his use of the clutch, he has decided to sell. Someone will end up with quite a treasure and the day it leaves that valley, I am sure, will be a sad day. You will see the listing in the classifieds for the contact information.

It was a great pleasure to meet you Merv and Clara, I wonder if there is a day in the future when you could attend a club meeting.