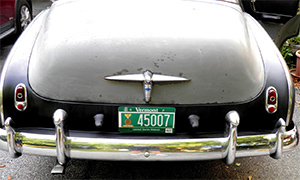 Ric is a retired Westfalia engineer where he spent much of his time installing and fixing the German company’s milk separators throughout Germany and the U.S. These were fantastic machines that could separate 100s of thousands of pounds of milk per hour. Donna is also retired after a career of working in medical administration. They are a great couple and their lives in Barre, Vermont seems right out of the “supposed-to-be” book. Ric falling on the ice recently, resulting in a head injury was not supposed to be and Donna discovering breast cancer last year was not supposed to be either; but guess what, they are doing fine… together. Donna swears by early regular mammograms and believes that is why she has beaten the disease. Ric has the Vet hospital in White River watching over him and is looking forward to being OK soon. 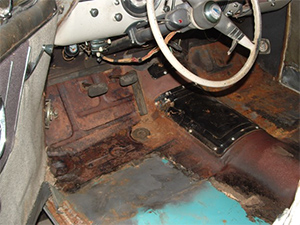 The ’50 Chev came into their lives about 5 years ago, purchased from a gent in Corinth, VT. A switch to 12 volts and some re-wiring has been done along with some rust damage work as you can see in the be-fore and after pictures to the right. You might also see a couple of other changes if you look sharp. The “three-on-the-tree” is missing and there is a stick coming out of the floor. Ric found the floor shift kit from a company called “Mr. Gasket”. You might also pick up something else that GM had nothing to do with… Bucket leather seats, front and rear! Ric found the seats in a 2002 Grand Cherokee Jeep and could not resist. He even has the electric seat controls working. 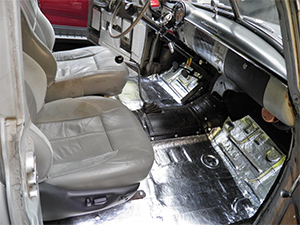 How many of us know the “real” name of the rope that goes across the back of the front seats of these early cars? Many of us think those ropes were there to help us pull our butts out of the back seats – NO. When talking of the old seats being taken out of the Chevrolet, Donna added that she missed the “blanket rope” that was there. Donna said she learned that term from her Grandfather many years ago.

The car could be driven very nicely when they first purchased it, in fact a number of miles were put on the vehicle that reached above 50 MPH. All the time there was an odd noise that Ric believed was some small detail that needed tending. Like all Chevys from 1929 to 1954 they had “torque tubes” where the rotating drive-shaft between the transmission and the rear-end was all incased in a tube that did not rotate. Ric found the “odd noise” was actually a totally disconnected U-joint that somehow was still doing its job. In fact, after replacing the warn bolts the original U-joint has continued to do its job. There are still things that need to be completed on the Deluxe Chevy including a new paint job. Ric has told Wheel Tracks he will send a picture when the new paint is on.