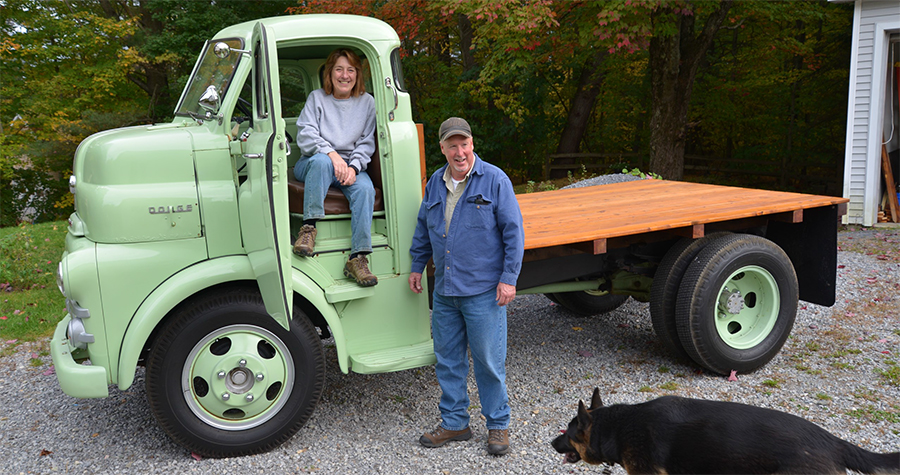 Why would Richard Kerr want a two ton Dodge truck? 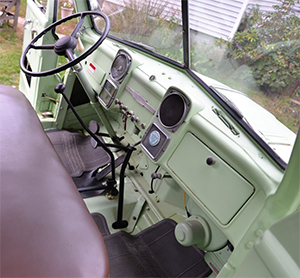 Yup, you guessed it… he has been a truck driver since he was nineteen years old and that is what makes him happy. He found the truck about 20 years ago, so the restoration has been a long haul for him. Richard works 10 to 12 hour days, for the past 26 years for ABF in the Burlington area, so he has had to farm a lot of the work out. He also claims he is not a mechanic but there is evidence in his garage that he might be more of a mechanic than he claims. They are a ‘trucking’ family, as Roxie works for FedX in the office in Burlington. She also has her antique ride sitting in the garage…a really nice MGB. 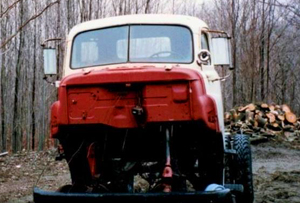 The truck engine, transmission and rear-end have all been taken apart and rebuilt when needed. The body was taken down to the bare metal before repainting this beautiful green. It is a very impressive eye-catching vehicle. Richard built the flat-bed wood body in his shop and as you can see, he did a great job. The truck has a 238 Dodge Six engine with a 4-speed transmission and a single speed rear-end with a weight capacity of 2 tons. It has 27,915 miles registered on its odometer. Some call this type of truck a “COE” meaning Cab-over-engine. Another term used is a “pilot-house cab” which seems to be a loose term used even for some Dodge pickups. A more modern term is “cab-forward”. 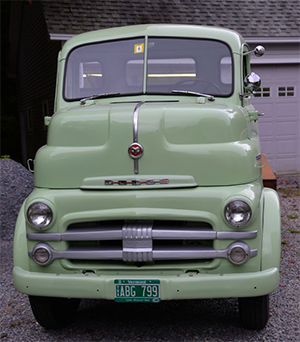 Another term that came up during the Wheel Tracks feature is something that is hard to read but is printed on the area just above the number plate. The term is “Job Rated”. The best history Wheel Tracks found was that Dodge started using it in 1938 as a sales way of getting folks to think about matching their “jobs” to one of the many types of trucks that Dodge produced. Do any readers have more of the term.

Richard bought the truck from Dale Slack of Jeffersonville, Vermont after it made its way here from North Carolina.

Editor’s notes… The amazing thing about this truck is how little is published about this type of Dodge truck. A few of us in the club have International High Wheelers and if you try to research this type of vehicle, except for some pretty pictures and a video or two, there is practically nothing available. I found the same for Dodge trucks from that time period. The High Wheeler folks attempted to put something together by starting a “registry” of owners and vehicles and the “Horseless Carriage Club” agreed to hold the registry. I did find a registry for Dodge trucks for 1948 to 1953 with only 298 trucks registered and no 1951 “Cab-over engine” trucks. This might mean that Richard and Roxie has a fairly rare vehicle. The Dodge Truck registry can be found online at townwagon.com

Another term I found when looking for information on this truck is “Fargo Truck”. Fargo was a brand of truck back in the 1920s and over the years after a number of buy-outs, Chrysler ended up with the brand. Also over the years, the way I understand it, the word “fargo” just became a truck type and not a brand.

Lets start talking about those heavier antique trucks. I know we all have stories from our younger days about these big work trucks. Example… I was too young to throw bales of hay on to the old ’47 Reo 2-ton. So they put me behind the wheel. I knew what I was doing but my short legs tended to get the truck into regular “jogs” that made the worker on the back of the truck call me names. If you have information or a truck… or a truck story please pass it on to Wheel Tracks. I know VAE members have a few pickups but I don’t know if VAE members own larger antique trucks.