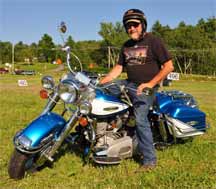 Mark McDermiott is pictured right at the 2014 VAE Car Show in Stowe on his 1967 Harley Electra Glide. He has had his Harley for 20 years and in that time has rebuilt and restored about every part on it.

This Harley’s engine has a “Shovelhead” top and “Pan” bottom. The “Shovelhead” term comes from the engine’s rocker box covers looking like an inverted shovel and was introduced in 1965. The rocker boxes before ‘65, starting in 1948, looked like pans… hence the term “Panhead”. In 1967 Harley had kept the lower engine design of the older Panhead engine which used a generator until 1970. They then changed to the alternator bottom.

The rocker boxes to Harley enthusiast identifies the engine. Before the “Panhead” was the “Knucklehead” started in 1936 and yes the rocker covers resembled the knuckles of a person’s fist. The “Flathead” preceded the “Knucklehead”.

Mark lives in Enosburg, Vermont and is part of the McDermott family of “McDermott’s Trucking”. He and his brother Pete are the third generation operators of the company. How many of us for years have seen the McDermott’s milk tankers hauling the product from farms and to the areas largest milk market in the Boston area? Mark is in charge of the company’s three garages that keep their 80 trucks and 100 trailers on the road.

Even though Mark is a mechanic by trade he decided to farm out some of the work in restoring his Electra Glide. John Johnson of Enosburg did the paint job at his shop. The engine and transmission was rebuilt by Drew Fairbanks of Johnson. G&G Buffing of Montreal did all the chrome.

This Harley has a 45-degree, air-cooled, V-twin engine with a 1208 cc displacement. There is no direct connection by Harley Davidson but about the time they presented the “Electra Glide” model to the public in 1965 was also the time they first introduced the electric starter. Is there a connection?

Along with all the “special” Harley terms that non-Harley folks often can’t quite keep up with is the term “Softail”. We have all heard the name and love the sight and the sound of the Harley Davidson but what the heck is a Softail? It seems in the ‘older days’ and during the chopper ‘60s and ‘70s the Harley had a fairly hard suspension… some called them ‘Hardtails’. By hiding the rear suspension under the transmission in the Heritage style and adopting the “Springer” front suspension, Harley was able to offer a softer ride…thus the Softail.