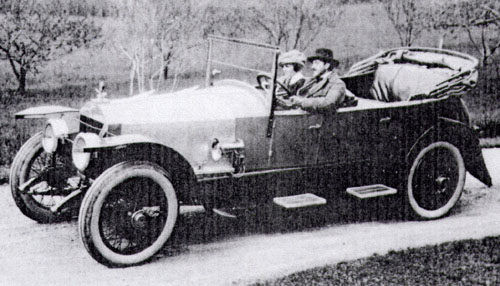 Excerpts from the book by Keith Marvin © 1961

The Wasp was unique in several ways. For one thing, it was designed for those who wanted something, which would transcend or surpass even the most personal examples of other makes. Custom coachwork could be had for a price, and purchasers of such high priced automobiles as Packard, Pierce-Arrow and the American built Rolls Royce were able to pay to satisfy their desire for custom-tailored, one of a kind coachwork, including such features as built in bars, special brocade or silk upholstery.

If a client couldn’t obtain exactly what he or she desired through the custom tailored approach on a given chassis, another make might be chosen in its place as a second choice. Such was not the case with the Wasp. There would be NO second choice. If the buyer wished for exclusiveness with no ifs, ands or buts, and the Wasp appealed, that was it. As such, it was perhaps the only American car of its time without a rival in this field.

A spin-off to this desire for exclusiveness sometimes entailed having a car built which looked like something else or nothing in particular. Such was the case with a noted financier who liked the appearance of the Mercedes, but in the period immediately following WWI did not want to own a German-made car. There was a simple solution: he had a special radiator made, directly copying that of the Mercedes, and attached it to his Packard Twin Six.

A second point that set the Wasp apart was its appearance, combining individuality in concept and an originality in every aspect of its design, a rather startling beauty without sacrificing utility and at the same time, avoiding eccentricity.

Third, the car was only advertised selectively as its builder had early in his business career come to the conviction that if such promotion was to be employed, it should be without cost. In point of fact, it should be free. Therefore, he successfully arranged for coverage with illustrations and text in the automotive press as well as in the prestigious magazines Vanity Fair and Vogue.

An exclusive design feature of the Wasp was its unique placement of the St. Christopher Medal on the dashboard of every car sold. There were two good reasons for this. First, Karl Martin had designed and struck a bronze St. Christopher Medal for Army and Navy personnel in WWI and had a number of these left over. Secondly, a religious man in his own right and a communicant of St. Peter’s Episcopal Church in Bennington, he always carried such a medal in his personal cars and he wished Wasp owners to do likewise. It was said (but never proven) that he would have refused sale of a Wasp to any purchaser who objected to the presence of the medal.