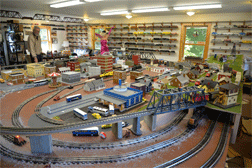 Bill Sander got the “green light” from his wife Jan, about 10 years ago….at least he went with his interpretation.

Bill had been into the Lionel train hobby for some time when one day there was a comment of him maybe getting a full sized train. Jan made a comment about “that happening will be the day he could find one that fits into his garage” Bill says that was the day he envi-sioned his “mission” and of course that led to a step-up from Lionel… the 7 1/2 inch gauge model train! It fits into the garage just fine and you can ride on it.

The red locomotive on the front page is a model of a General Motors SW1500 Diesel. This unit and a second Elco RS3 model that Bill has were the two main work horses used on Vermont rail roads. They were built much closer to Road Switcher specifications and not yard switchers and were very capable of pulling their loads through our hills and valleys. There were 808 SW1500s built by GM from 1966 to 1974 and the 1500 HP engine was capable of reaching speeds of 60 MPH. The Alco RS-3 is the 3rd design variation and continued to the RS-11 design. The RS-3 was built by the American Locomotive Company and the Montreal Locomotive Works and has a 1600 HP engine. Between 1950 and 1956 there were 1418 built, 1265 for American railroads, 98 for Canada, 48 for Brazil and 7 for Mexico.

Bill’s SW1500 locomotive is powered by a gas 17 HP Briggs and Stratton engine and rides of tracks seven and a half inch wide. The 7 1/2 inch tracks are used mostly in the western states and is said to follow the example of Walt Disney’s layout in California. The eastern modelers mostly use 7 1/4 inch tracks….. Bill went with the western tradition. Bill’s model is hydraulically powered by both the wheels under the locomotive and the wheels under the second car, it has reverse, lights and a recorded sound track of the real deal as he moves along his 450 feet of track.