Doris Jane Doerfler Bailey died on September 13, 2016 at the age of 94. She was born on March 10, 1922 in Yonkers, New York, the fourth of five children of Dr. William and Betty Doerfler. She lived in Hastings-on-Hudson, New York until age seven. Then after her parents’ divorce, she moved to and was raised in Morrisville, Vermont where she rode horses, swam at Lake Elmore and graduated from Peoples Academy. On January 19, 1943 during World War II she married Everett Bailey before he was deployed to Italy with the 10th Mountain Division. Doris and Everett met skiing on Mt. Mansfield before the lift was built (in 1940). Everett and Doris lived and raised their family in Williston, Burlington and South Burlington.

She had a fondness for antique cars (She was her own mechanic.) including a 1947 MG TC which she drove to Nova Scotia when she was 80 years old. She was an active member and officer of the Vermont Auto Enthusiasts and worked for years on the annual antique car show in Stowe. She was predeceased by her husband, Everett, in 2014, her oldest son, David Leslie Bailey of Montpelier, and her siblings, Doug Doerfler, Dorothy (Dot) Sargent, Dayl Kelly and David Doerfler. She is survived by her children, Thomas Bailey (and his wife, Linda) of South Burlington, Vt., Anny Cain (and husband, David) of Jamestown, R.I. and Everett (“Clark”) Bailey, Jr. of Draper, Utah, and grandchildren Tappan Little of Colchester, VT, Spencer Bailey (and wife Jacki) of Burlington, VT, Skyler Bailey (and wife Crystal) of Newport News, VA and Rachel Dibiase (and husband, Dave) of Vergennes, VT.

From Jan Sander… I took these photos (the front page) of Doris in 2003. Our club, The New England MGT registry publishes a magazine called “The Sacred Octagon” and the publisher had asked me for a picture of Doris in her TC for our front page. The featured picture was captioned “The MG Girl”.

When Doris received her copy she was elated and immediately called me up. Her first words were “Jan, we’re FAMOUS”! I had won the Best Cover Photo and she was the cover photo.

Doris and I met in the late 80s at one of our Stowe Shows. I had returned to my TC and she was sitting there waiting for me. She explained that she knew my car because she had seen it in my driveway many times and that she had owned a TC for many years but had sold it. She missed her old MG. That was the beginning of a wonderful friendship and the start of Doris’ successful quest to track down her beloved green TC and buy it back. That also brought her back to the VAE.

There are many more Doris Bailey stories, but they will be for another day in Wheel Tracks and TSO.

This loss is not just the VAE’s loss. Doris was (is) a unique and exceptional person. She and I drifted together through Maynards Auto Service and their extension, Vermont Engine Service. Doris was drawn to this automotive stuff and became somewhat of a “groupie”. She then worked her magic on me and got herself hired at our auto dealership as a line mechanic. Friday afternoon we’d send her off to a social weekend of country club activities or to the current concert circuit with mechanics fingernails but Doris could handle most things. (Think of her most recent Wheel Tracks Softer Side article.)

Although she physically wore out after a few weeks rotating tires and doing brake jobs, she (and I) were proud that she was Burlington’s first female dealer line mechanic. She loved most things on wheels, music, poetry, the big Camaro, the little MG, the London taxi were the wheels¦ And you and I were the rest. Did she ever tell you the inside story (s) of her part in the Great American Race? I bet she did! ..and so much more.

Rest in peace Doris Bailey… It was great to have known you. Gael Boardman Thank you for your dedication

When asked about Doris and “The Great Race” Son-in-law, George Little writes… 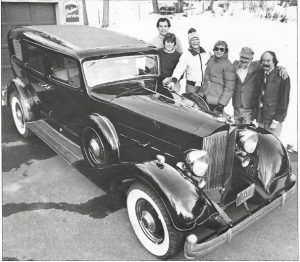 was the 1985 Great American Race that Doris was involved with. She and Avery Hall organized and largely funded a Vermont effort using the late Joe Kaelin’s 1944 Packard twelve seven-passenger sedan.

Our brochure is attached, showing, L-R on the cover, Joe Kaelin, Linda Welch, Vicky Buffum, Doris, Avery, and myself. The route was LA to NY; the field was about 120 strong, and we finished about 60th, or respectfully if not spectacularly.

This was one of Doris’ many automotive adventures, though I’d hazard to observe that we often considered the GAR more “character building” than fun.

As Jan may well illustrate in her comments, it was with her 1947 MG TC, and the not-so-serious “Sacred Octagon” crowd, that Doris had genuine Big Fun. Big Fun for Doris was people. She loved being out and about with friendly, like-minded folk, and would take every opportunity to start and keep conversations going.

You can see why the GAR was not necessarily a good example of this recipe.