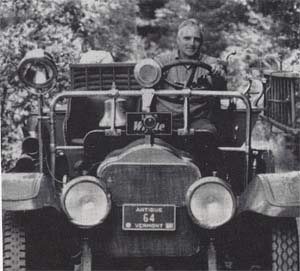 VAE records seem a little hazy in establishing the exact date that this month’s Big “E” winner joined our organization. Who would have thought on that date that this new member would bring so much to our hobby and club? This committee has been too embarrassed to ask Tom himself just when he handed over his first dues… but we are sure glad he did. This is what long-time member Mary Jane Dexter has to say about Tom…

“Maclay” is now synonymous with the Stowe Show. Scotsmen for centuries made enormous contributions to the modern Western world. And we have our own Scotsman in our midst who has an uncanny sense of how to make something work well at the Stowe Show. You can call him hardworking, able to organize, knowing how to systematize ideas, capable of getting people to work for him, and you would not be far from the mark.

Tom began his Stowe Show chairmanship with a vacation atmosphere, pressing his family into service for a “week in the country” on the show field! Members of the club were drawn by this kind of Maclay inspired fun/work plan, and the project was up and growing. He seems to be able to keep things under control, except the weather. Yet, even through the mists and showers, dust and mud, Tom always manages to keep his calm and finds the best possible solutions for the problems.

Hats off to Tom Maclay for his many contributions to the VAE, but most of all for his success in steering the cars in the right and proper direction during the Stowe Show.

Board Member, meet organizer, planner and general all around Big “E” guy. To quote him from our 50th year book he has requested that his last ride be in his White-Kress fire truck which is always in the Stowe parade with him at the wheel. Tom… the White has a lot of good miles left in it, and so do you. Thanks for all you have done, are doing and will do. Thanks for being a VAE Big “E”.