It is like sitting in your living room recliner when you ride down the road in this 1952 Imperial!

I bought this 1952 Imperial from a dealer is Canton, Ohio six years ago. It had been owned by the financial manager at the Canton Chrysler dealership who drove it to Florida every year. I bought this car solely on the basis of photos on-line which looked pretty good. The dealer told me it would need some plating…fine, then a week or so later he informed me that the engine needed a total rebuild, also saying he would rebuild the carburetor, which he never did.

At this juncture, it should have been a deal breaker, but I stumbled on agreeing to go forward. To his credit, he did lower the asking price. Finally the work was completed and we agreed to meet at Hemmings in Bennington where I would drive it home to Mont-gomery. When we got the car off the trailer it would not start. After various experts tried to figure out the cause, McNessor, one of Hemmings editors, found the fuel filter was on backwards. The filter had arrows indicating the fuel flow and they were definitely pointed in the wrong direction. 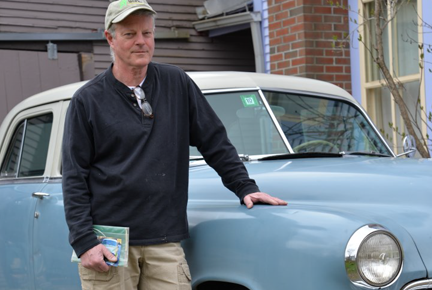 Recklessly, or just poor judgement, we decided to risk driving it home. It first stalled on Route 302 in Barre, backing up traffic for a half mile; then again in Shelburne but we finally did get home. Since then the carburetor was rebuilt by the Carb Doctor and there have been no problems.

I have had three different mufflers installed from local vendors, one even blew out the minute I started the engine. I am no mechanic but got good advice to order and install an original type muffler from Waldron’s. I have had no problems since. 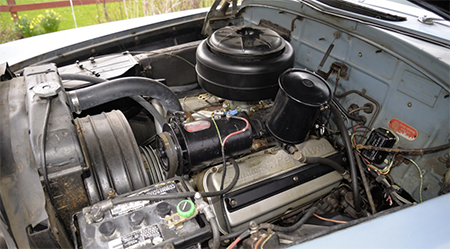 The car has needed a lot of additional work. A complete rewiring, more chrome plating, new tires and mostly correcting a lot of poor workmanship done by others. A new paint job and upholstery is my plan yet to do.

When I worked in Cape Cod one summer, an elderly lady with a mean face was walking by the house I was painting. I said “Hello”. She said “How are you?”

Replying honestly, I said I had gotten a severe sunburn that Saturday.

In a dry, raspy voice she replied, “ Well, I guess you learned your lesson!”

Yes, the lesson is when buying an old car, go and inspect it. Try to buy one, if you can, with low mileage and as good condition as you can find. Because the restoration cost are simply prohibitive.

Editors notes…….
I was surprised with Barry’s reply when asking him if I could fea-ture his Imperial. He thought Wheel Tracks only used “really old” cars for it’s features. He is correct and that is entirely my fault. My head is in vehicles older than 1930 and unfortunately that is what ends up in Wheel Tracks. I will try very hard to be more in-clusive of 1940s, 1950s and 1960s cars.

As I wrote on the front page, it WAS like sitting in my living room chair when Barry took me for a spin in his car! The transmission is a ahh-so-smooth “Fluid-matic Drive” an interesting cross between manual and automatic. The shift lever has reverse, of course but also “low range”, “neutral” and “high range”.

Another huge thing you will notice is when you close a door. It goes THUNK, not twang like my model T or boing like a 27 Dodge I know!

The Imperials were made from 1926 to 1954 and then a short time between 1990 and 1993. Barry’s “Chrysler Fire Power” engine is one of Chrysler’s first Hemi’s and puts out 180 HP. Chrysler, in WW2, developed their first experimental hemi engine for the Republic P-47 Thunderbolt fighter aircraft. The XIV-2220 engine was an inverted V16 rated at 2,500 HP.