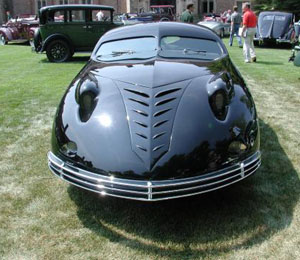 The Corsair, based on a Cord automobile chassis, was more an out-right failure of styling than of design. The Cord Company had been responsible for some very good-looking automobiles. This was party because Cord chassis, with their high-performance engines and exotic front-wheel-drive configuration, were naturals for any designer with a yen for sleekness and and exclusivity. Among the designers Cord cooperated with were Gordon Buehrig and Carl Van Ranst, who turned out notable designs for the L-29, the 810 and 812 Berline.

There were, however, those designers who had dreams of beauty and elegance but were unable to realize them – either through their own love of idiosyncrasy, or through lack of talent. Perhaps the worst designs were those perpetrated by the designer with zeal but unclear purpose

The design was supposed to be a sleek, futurist bombshell of a car, powered by a high-performance Lycoming straight-eight engine. In a way it was ahead of its time with completely faired-in fenders, and a low silhouette. Its proportions, however, were all wrong, and the fender sides dropped straight down from the windows like the sand guards on British Crusader tanks of the period – an effect that was only emphasized by the full skirts on the front and rear wheels.

The headlights were like cat’s eyes, vertical slit units set in sockets that were molded bulbs of metal. They strongly resembled the eyes of a semi-submerged hippopotamus and evoked a sense of bemused loneliness. As a whole the car looked fat and behind the strange front end, the sides ran back in unbroken plainness, without even door handles in the seamless panels.

A limited production run was planned but never realized. This may be due to the car’s reception in its big chance at a public-relations coup… the car was featured in the 1938 Selznick International Films motion picture “Young at Heart” staring Douglas Fairbanks Jr and Janet Gaynor. The Corsair emerged from this venture with a new, popular moniker – “The Flying Wombat”.