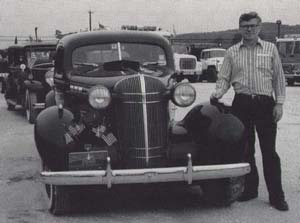 Regular readers will know that during our 50th year (2003) Wheel Tracks has been sharing information on some of our most special members… those that have by their time, ability and continued work, have won our “Big E” award. We all are Vermont Automobile Enthusiasts and the Big E is for Super Enthusiasm.

This month’s nod goes to a two time president who is still young enough to do it again… except he has been so busy doing so many other things for the club that there hasn’t been time. Our 1979 President, Gen Morgan, endorses this Big E as follows:

Who is Mr. Flea Market of the VAE? It’s Tom McHugh of course. Tom has been doing the flea markets for all shows for many years. Before completing requests for vendor spots for the Shelburne show, he is also receiving requests for the Stowe show. It is now small task to handle the correspondence, phone calls and emails.

Tom goes to Stowe a week previous to the event to get everything organized. For instance, he draws a good size map, which shows the location in the field of every vendor. It is a most convenient sort of reference. The trailer has become an information center.

Tom joined the club in 1971, did the offices and served as president in 1974 and again in 1989. He has hosted home meets with chicken BBQs, planned mystery tours, and worked on Wheel Tracks to name a few activities. In other words, you name it and he has done it for the club.

With his committee, he has just finished the Book of the Fiftieth Anniversary of the Club. A lot of hours were spent on this project. As a result, we have a wonderful book of VAE history, which also includes many fine photos. The membership is gratefully appreciative of all the work and effort involved. Tom is retired from General Dynamics but has gone back to work for the company again.

Besides his interest in Antique Cars, of which the Oldsmobile is his favorite, he also collects antiques and is interested in genealogy. Somehow he finds time to be a volunteer tour guide for Ethan Allen Homestead in Burlington.

Tom is a busy person, but never too busy to help or chair an event for the VAE. Oh, and don’t forget his bean hole beans!

The Club extends condolences to Tom and his family on the recent death of his granddaughter, Jennifer.

Congratulations Tom for work well done and thanks Gen, for reminding us that it is people like Tom McHugh that keep the “E” in the VAE.