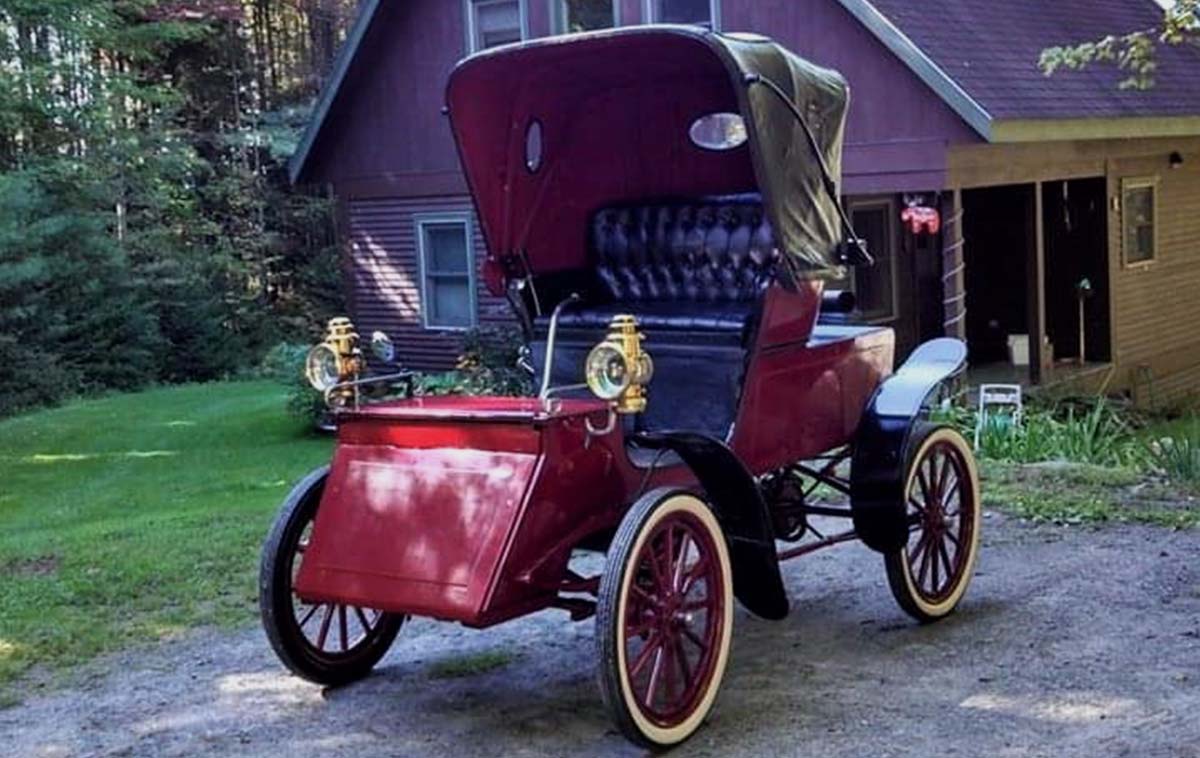 Bill Cooke and Sarah Moon have a car they call “Tilly”. The car is a 1903 Grout.

Above, is the completely restored Grout, a Model J Drop-front Roadster, of today.

The story from Bill and Sarah

Tilly, our 1903 model-J drop-front Grout, joined the family in the summer of 1967 in a group-purchase that included an ’06 Franklin, a ’23 Ford pickup, a ’16 Oakland, and a ’46 Chevy hauler. The previous owner was Harry Hopewell, a real estate developer from New Hampshire. He had purchased the Grout from a family in Maine in 1941, it had been in a wood shed from 1905. The lady of the house had “inherited” it and had a particularly bad day of driving the car, topped off with running over the neighbors cat in the driveway.

Harry stored it in his father’s garage for the duration of the war, eventually putting it on display in Glenn Gould’s Meredith, NH car museum. Gould was in the process of moving his museum to Wells, ME when Bill’s dad, Frank Cooke made the group-purchase. At the time of purchase, Tilly was thought to be the last surviving Grout. However, a Mr. J. Beun had been working at his model J restoration since 1955.

Tilly was running again in 1968, needing only a few mechanical repairs and eventually a paint job. The next 3 decades were pretty sweet. Lots of meets, shows, and a few cameos in local TV. Tilly made 2 ½ London to Brighton runs, 1979-81, and met another Grout in 1981, who also thought they were the sole survivor. The car kept putting away in central Massachusetts with the local car clubs calling her the only running Grout. Then in 2005, a boiler replacement project revealed a sag in the wooden frame that was threatening to break the car in half.

The full restoration was started in 2013. The woodwork was done by Mark Herman in CT. He replaced the frame, and repaired the body panels that could be saved. The wheels were rebuilt at Stutzman’s Wheel shop in PA. We did the prep work for the paint on the body, wheels and wooden fenders, which was completed by Randy Beaudoin and Kenny Jacobs in MA.

The boiler and burner were made by Don Bourdon in Woodstock, he also got us in touch with the man who made the copper water tank. The leather is original to the car. All the plumbing and mechanical restoration was done by us. Sarah made the boots for the top and the era inspired costumes for us.

Tilly enjoyed a full debut season in 2021, participating in an annual steam car tour, and 3 large car shows including the V.A.E. Waterbury show and a couple best in pre-war awards.

Mr. Beun’s car has made it to Australia and is now active in the car community there. We now know of a dozen Grout cars world wide, and though the company started and ended with internal combustion vehicles, only the steam powered cars survived.