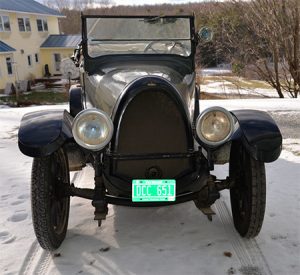 This 1919 Franklin Touring has been a car David Lamphere has known about much of his life. Franklin manufactured about 150,000 cars in Syracuse, New York from 1902 to 1934. This one has a story to tell…

World War I had just finished its four year blight in November of 1918, our 26th president, Theodore Roosevelt, died in January and according to Wikipedia, Amānullāh Khān became king of Afghanistan. 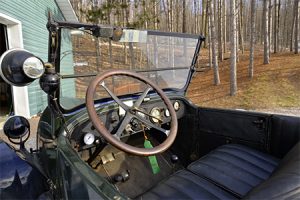 In Rutland, Vermont that year George Lamphere was shopping to buy a new car. He and his wife, Eva, lived at 3 Clarendon Avenue and their creamery & dry goods store on Main Street must have been doing fairly well. There were a number of auto dealerships in the area but the one at 107-109 West Street must have caught their eye because they sold an air cooled car where you didn’t have to worry about the radiator freezing up during the winter. Another thing they might have seen in the car ads was, “you could put the accelerator to the floor, even in the desert, and run it that way all day or until you ran out of gas”. That is how good these engines were. The dealership was named Rutland Machine and Auto Company and they sold Seldon trucks and Franklin Automobiles. The Franklin touring car pictured above is the car the Lampheres decided upon.

David and Cereta Lamphere are VAE members from Westford, Vermont; George Lamphere is David’s grandfather and the Franklin touring sits in David’s garage today. The car was passed from George to David’s dad, Richard, and then to David. 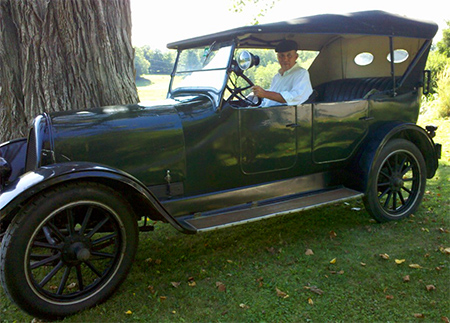 The Franklin Company had sold about 43,000 cars by 1919 and had the process fairly well perfected by then. They were using 6 cylinder engines in 1906 for some of their models and by 1914 all Franklins had six cylinder engines. Managing the air flow was important in these air cooled vehicles and until 1922 all that was required was a fan between the engine and the transmission to help “pull” the air through. As the horse power increased they moved the fan to the front of the engine and continued to use the cylinder fins to force air down past the hot cylinders, this was called a “down-drafter”. As the 6 cylinder engine power grew, from 24 HP to over 100HP, the company changed again in 1930, to keeping the fan in the front but now forcing air “across” the engine thus calling it a side drafter. A much more efficient way to keep the engine cool.

It appears George and Eva began a family tradition with the Franklin car. Over the years they had the 1919, a 1923 sedan and two 1929s sedans. One of those 29s later was reworked into a pickup truck which also sits in David’s garage. David’s dad, Richard, added a 1930 and 1931 sedan to the family Franklin history and then David took his turn when he was 15 years old, when he purchased a used 1930 sedan for $45.00. David also bought a ’31 roadster at one point bringing the count to eight Franklins.

Richard was an engineer and loved to tweak things and make them better. While the 1919 was in his possession he added an electric fuel pump with a pressure regulator, to keep the carburetor from handling anything over one and a half pounds of fuel pressure. He also added a fuel pressure and a vacuum pressure gauge to the dash. The ignition switch has an extra position so when you engage the starter a second battery is wired in to have 12 volts. Once the engine is running, the switch is moved to the 6 volt position.

It is probably not totally unusual for an automobile to be purchased new and be in a family for ninety eight years, but Wheel Tracks did not want to miss out telling this story.

As you have read in our classifieds the 1919 is for sale. David and Cereta need to down-size and have decided to try to find a good home for the old girl, that still runs perfectly. The hope is that the car stays in the VAE family and will have many more stories to tell years from now.

How many of you will be watching for those Rutland addresses the next time you go through. Please take a picture of what is there now and send them to Wheel Tracks.