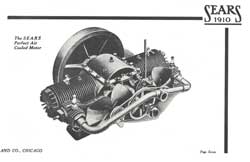 Many VAE members have seen Bill Erskine’s Sears Motor Buggy. Some have even seen him arrive at a VAE meet with the crated motor buggy just like it arrive by train from Sears, Roebuck in 1910 and watched him assemble the vehicle.
Bill has had this Motor buggy since 1999.

Reprinted from old publications Wheel Tracks found that…..Lincoln Motor Car Works was an automobile company in Chicago, Illinois. It produced cars for Sears Roebuck from 1908 until 1912. Nine models were offered, priced between US$325 and $475. They were sold by mail, out of the Sears catalog. Sears had a very lenient return policy: cars were sold on a ten-day trial basis.

The cars had an air-cooled, two-cylinder, horizontally-opposed engine, similar to that later used on BMW motorcycles. The engine was located under the floorboards, beneath the drivers feet, and started from a hand crank in the front. Early cars were rated at 10 hp, and later models developed 14 hp.

In the interest of simplicity, all models used a friction-drive transmission. A roller (a metal wheel with a rubber surface vulcanized to increase its grip) on the front sprocket shaft was pressed against the machined rear surface of the engine flywheel, thus driving the sprocket shaft, the drive chains and the rear wheels. Moving the shift lever set the drive roller to various positions on the flywheel, either nearer the center or nearer the edge, effectively changing the “gear ratio” for climbing hills or driving on level roads. Moving the roller past the center point spun it backwards to give reverse gear. The “clutch pedal” worked differently from most other cars, in that the operator had to hold their foot on the pedal to keep the roller pressed against the flywheel (the catalog claimed that the weight of the operators foot was sufficient to provide forward motion). Removing the foot from the pedal allowed the roller to spring back from the flywheel, effectively providing “neutral” so the car could be cranked without moving forward. 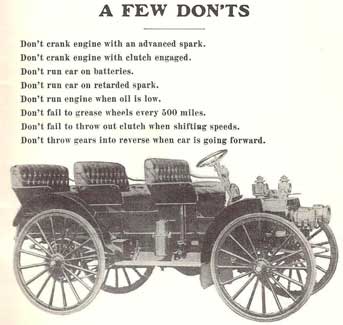 The engine was lubricated by an “oiler”, essentially a tank mounted under the seat which had several adjustable drip feeds with separate lines to the engine bearings and other areas. All components of the transmission were exposed, so several bearings and pivots had to be oiled or greased manually from time to time.

Despite Sears’ solid financial bases and great marketing ability the Sears Motor Buggy was doomed from the start. Sears competitors were making many advancements and by 1912 Sears automotive division had lost $80,000. After selling around 3500 Motor Buggys in four years Sears decided to stop. Lincoln Motor Works continued into 1913 to make vehicles under their name until they also stopped.

Today we call the vehicles “High Wheelers” but the term very likely will confuse any ‘old timers’. Sears had it’s Motor Buggy and International Harvester had its “Auto Buggys” and “Auto Wagons” like the picture to the left. Auto Buggys had a back seat and Auto Wagons did not. IHC made this type auto wagon from about 1909 through about 1915 when the term motor truck slowly took over. IHC made many models of vehicles during this period: from the auto wagon and auto buggy to the roadster and the touring car, in all over 11,000 vehicles were built.

Have you ever seen a Sears Motor Wagon and an IHC Auto Wagon race?
Watch here, or go to this address on the web, it is a hoot. http://www.youtube.com/watch?v=8qLpBv4qm6A

If somehow we could take ourselves back to visit 1910 when the Sears and IHC were trying to make a buck building motor vehicles you will find a few competitors. No wonder Sears stopped and IHC went to trucks! Here is a partial list of the other car companies.