Is this the same #67 in both pictures?  Ken Gypson’s ‘37 Ford has been around creating history for 81 years and still going strong.  Hal Boardman’s diorama proves the car still inspires…

Two years ago the VAE ventured south to Bennington for a Hemmings cruise-in and a visit to our hosts, Ken and Nancy Gypson, in New York. After morning coffee, juice and muffins-to-die-for, we went out to wander through Ken’s barn. The barn holds a collection of autos, large and small. A must see. Among the full sized cars was a ‘37 Ford 2-door sedan. Ken was in the process of restoring the former round track race car. I took a few pictures and then we hit the road.

A while later the VAE had it’s annual holiday party and I chose an exchange gift of a hot-rod model A Ford 2-door sedan. Walking by Ken’s table he said “glad you got that, you are the only hot-rodder here”. By chance, I happen to see a picture of Ken’s restoration project on line, and I put the two together, the beginning of the diorama idea. 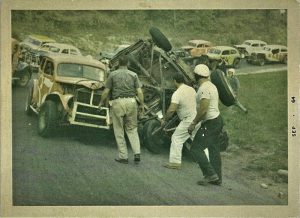 The following year I campaigned for another Hemmings tour, it was a great time and… I needed more pictures of Ken’s garage and his race car restoration project. Once again, we had a great cruise-in, and visit at the Gypson’s. I wonder if Ken noticed my mission of taking pictures of every square inch of his garage. I got more pictures when #67 made it to our August show in Stowe last year and then, my winter project began.

While my ‘39 Ford project sat in the corner of my garage, I spent time working on the smaller project of a 1937 race car. I gathered models and parts saved from my youth and began the diorama. I found an old 49 Ford kit in my collection that provided wheels, tires, trophies and even that small dog you see lying on the floor, in front of the car. As my project started coming together, an artist friend offered to paint the number on the car and the walls to match Ken’s garage. Pam even made a small leather belt, that was used to wrap around the passenger door post, to keep it closed during a race. Thank you Pam.

I hope Ken can find a small space in his vast collection for the diorama. I hope, also, that he enjoys it as much as I have building it.

Some history now of the racing #67, from a story Ken Gypson had written earlier… 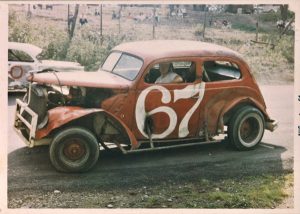 In about 1985 my family and I moved to Poestenkill, NY. Just down the road (to my delight anyways) was Wait’s Junkyard. The Waits had a bunch of old stock cars scattered about and a particular ’37 Ford sedan caught my eye. For 2 years I tried to buy the car…no go. In April of ’87 we had an ice storm that knocked down trees and power lines. While I was in the road clearing debris with my chain saw John Wait Sr. asked if he could borrow the saw. I told him he could have the saw if I could buy the stock car. He grunted and left with the saw. Two weeks later I came home from work and there, the ’37 sat in my driveway! 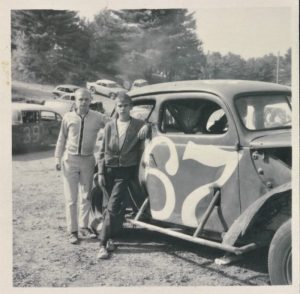 I have been fortunate to be able to get the complete history of #67 from the day it was built. In 1961, Paul Leinbohm paid $50 for the body and chassis from Slovak’s Junkyard in Stuyvesant, NY, and a 1953 Merc engine from Lou Hacker of Rt 20 in Nassau, NY. Before he could drive the car, he was drafted into the army, and sold the car to Paul Visconte of Schodack, NY. Visconte had George Henderson of Niverville, NY, drive it with number 300D at Rt 66 Speedway in Poestenkill, NY. 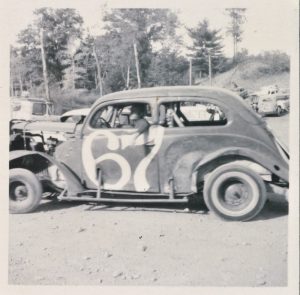 In 1963, Visconte renumbered the car to 67 (as it is now) and raced it at Victoria Speedway outside of Albany, NY. Ironically, Visconte also ended up in the Army and left the car behind his mother’s house. Gordy Film of Wynantskill, NY, bought the car in 1964 for $300 and raced it at Pinebowl Speedway in Poestenkill, NY, during the ’64 and ’65 seasons. #67 ended up in Wait’s Junkyard across the road from the speedway’s entrance. 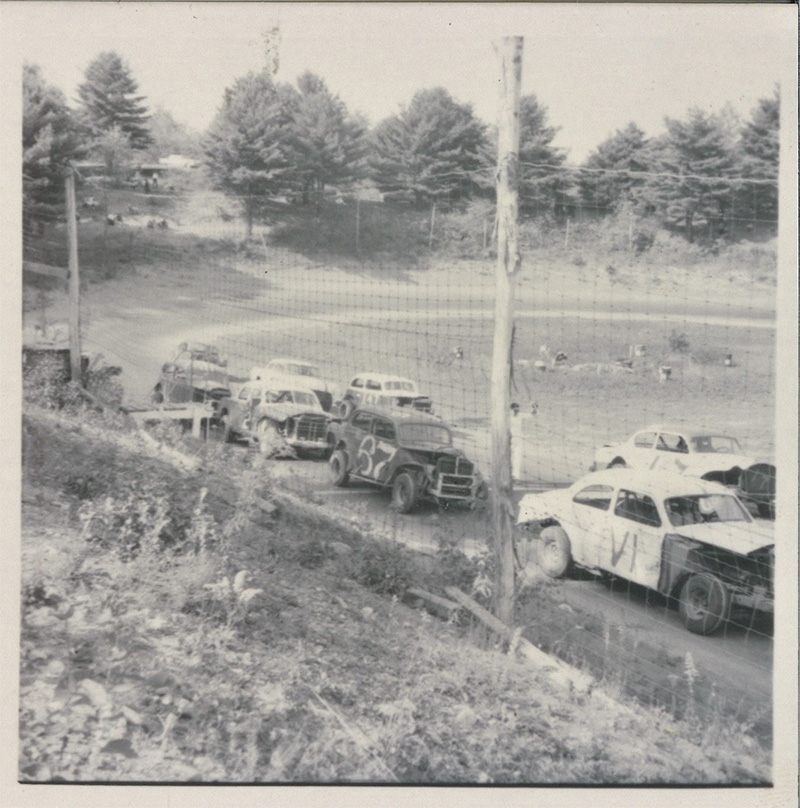