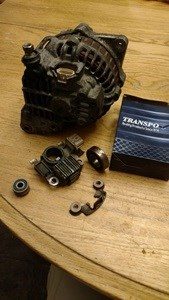 I ordered the parts on line. Surprisingly, I have found most parts stores do not sell alternator rebuild kits. I have to buy them from automotive electrical or electric motor parts suppliers.

An examination of this alternator revealed the brushes were well worn, almost at the end of their useful length. Both bearings rotated freely, however sounded and felt slightly “gravely” when rotated. The rebuild kit came with both bearings and a brush/regulator assembly.

Rebuilding of the alternator was very straight forward. First, I removed the drive pulley with an impact wrench. The pulley easily slid off. Next, I opened the case by removing the four bolts holding the case together. The front of the case came off after several light taps with a hammer. I carefully compared the old parts with the ones that came in the rebuild kit to ensure I had the right parts. Once the front of the case was off, I removed the four screws that held the front bearing plate on. These screws required the application of a torch to free them, but came out easily once some heat was applied. The front bearing came out of the case easily, with a gentle push from my thumb. The new bearing easily slid into position, and was secured with the four screws and the retaining plate.

The rotating assembly was removed from the case next. A careful inspection of the slip rings showed they were in good condition. There had been no arcing against them from the brushes. The rear bearing needed to be removed from the shaft in the press with a bearing knife and a drift. Great care is exercised to prevent damage to the assembly. The new bearing easily pressed on to the shaft.

The brush/regulator assembly is soldered into the case. I needed to melt the old solder connections with a soldering iron. Careful inspection showed the remaining parts of the alternator were in good condition. I carefully cleaned the alternator case while it was apart, rinsing all pieces with electrical cleaner.

I mounted the new brush/regulator assembly in to the case, and soldered the connections with electrical solder. The brush assembly came with a small wire to hold the brushes in place. It is important to leave this wire in place, and carefully thread it through the small hole on the back of the alternator assembly. It is impossible to mount the rotating assembly into the case with this wire removed, as the spring loaded brushes will interfere with the slip rings upon reassembly.

With the brush/regulator assembly installed, the alternator can be reassembled. After assembly, it is important to ensure the alternator spins correctly, with no noise or interference.

This is an easy and inexpensive preventative maintenance step.