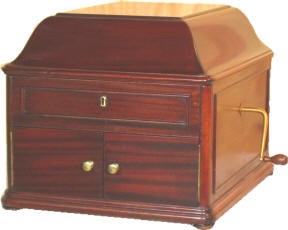 The other day, looking for “busy work” so as to avoid jobs like cleaning the cellar, etc., I chanced on my teens era RCA Victrola. It’s a trade model and has always been quite good. I put on a Victor “double disc” record, wound up the machine, released the turntable brake and awaited music. The turntable barely turned and the terrible low speed music was accompanied by an unfortunate reoccurring screech. I know quite a lot about this machine’s history and it has had minimal and gentle use. Nothing to do but to take it apart and see what’s wrong. Inside there is a care and maintenance label. It suggests lubrication. RCA wants you to use Vaseline…but there was a little blue jar of Vicks Vaporub. Just medicated vaseline, right? Dave’s garage would be proud of me! Did it fix the Victrola? No, but the gear train worked real smoothly and smelled healthy just like me. The problem turned out to be a slight warping of the aluminum turntable so the underside would hit on the breaking mechanism, drag down the speed and screech. I ground down the high spot and now it’s all music to my ears.

In the 1950’s, Mahlon Teachout bought a Victrola from the estate of a woman who was said to have received it as a gift from a suitor who never returned from WW1. She never could bare to play it and it was put away.

Some time later, I got it in a kind of complex trade with Mahlon. He got a small plot of land and a ruined saw mill building and I got the Victrola and a 1920 Buick GK45 touring car. The Buick made it to one of the first Stowe Car Shows but I cannot say for sure, the very first. I sold it to get married in 1960 but I still have the Victrola and good memories of both.