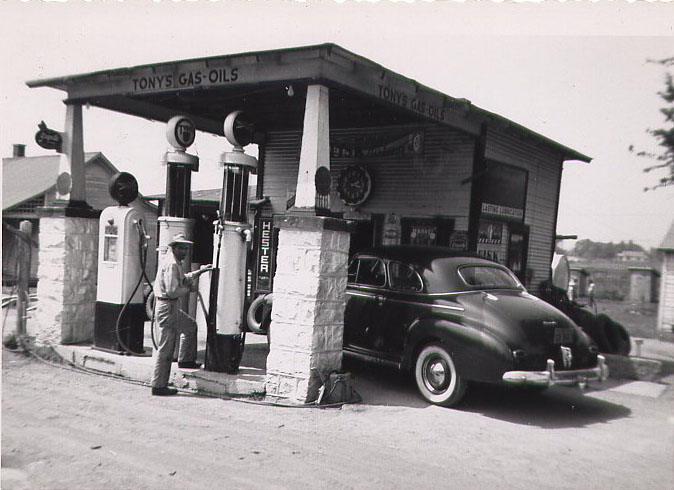 I came across this old photo recently and it got me to reminiscing about visible gas dispensers. We have all seen them in museums or may have one on display in our own shop or garage. They were the most convenient way to dispense gasoline before the calculating electric pump came into use. Probably not many of our VAE members have been served from one of these tall rugged beauties. I have used these actual pump as I worked as a very young boy at this busy little gas station in my hometown of Hartshorne in southeastern Oklahoma.

This station was across the street from my home and a natural hangout for me, so the owner, a very old and lame man, put me to work whenever I showed up after school and weekends. That was in the 1940s. When I left for Vermont all three pumps were of the old visible gravity flow type. This photo was taken on a return visit in 1951 and one electric pump had been installed in my absence.

The clear glass container on top held 10 gallons and the drill was to replace gas sold by pumping the large handle after each sale as the attendant in the photo is doing. To prevent theft all the pumps were drained back into the underground tanks each night and the pumping handles were padlocked. Of course, we had to pump a total of 30 gallons back up on opening the next morning, which was a good workout.

Numbers to measure the gallons were visible through the glass starting with zero at the top and number 1 through 10 in gallon increments down to the bottom. The most common sale was 5 gallons and a gravity feed hose with nozzle similar to today’s nozzles controlled the flow. You had to keep your eye on the gas level and stop the flow exactly on the marker for the desired number of gallons sold.

During the time I worked there, the price of gas never changed. It was 16 cents for white gas, 17 cents for regular (we called it bronze), and 18 cents for Ethyl. To calculate a sale there was a piece of paper taped to each pump listing the gallons multiplied by price for the attendant and customer to refer to. Speaking of prices, everything was much less in Oklahoma than I found in Vermont. We sold bulk motor oil in those refillable glass bottles with the metal pour spout.

That oil went for 35 cents per quart of 3 for a dollar and many of those old cars would take 3 quarts when they came in. We sold kerosene for 10 cents a gallon and soda pop out of the icebox for a nickel. Other items of interest were that no cash register was used and the attendants carried and made change out of their pockets, as was the norm with the other stations in town.

We were paid daily. The full time attendants were paid one dollar a day and the part timers got 35 cents with free sodas but everyone got a 25 cent bonus for each flat tire repaired. There was very little bookkeeping.

The climate was warm so the lube and oil change rack was an outdoor wooden drive-on ramp on the other side of the building. The war was on and tires were unavailable. To keep the cars on the road amidst frequent blowouts, vulcanizing, reinforcement boots and inner liners were used.

Though only a kid, I became proficient in repairing large blowout holes in tires and inner tubes. Every evening there was a rash of flat tires to fix when customers returned home from work at the bomb and ammunition factory in nearby McAlester. To change a tire many attendants never bothered to remove the wheel from the car. We just jacked it up and with tire irons pried a tire off the wheel and levered the repaired tire or replacement back on. Great time saver.
`
The majority of our customers were driving Model A Fords, Chevys, Dodges and Plymouths of the 30s and 40s. I never saw a Model T drive in as they went out of favor quickly in the wide open spaces of the West. Antifreeze? We never heard of it. If a rare cold night was expected, cautions people drained their radiators overnight. I never heard of a cracked block due to freezing.

Happily, when I took over my own station in Wells River in 1956 for a 41 1/2 year run, things were a lot more modern. Many of the basics I learned in that old place came in handy and perhaps that’s why I can relate so well to the antique car hobby.

The man in the 1951 photo is Johnny Zelnick who had become owner of the station with his brother known only as “Smiley”. They were both employees when I worked there. The car is my Uncle Earnest’s 1948 Chevy.