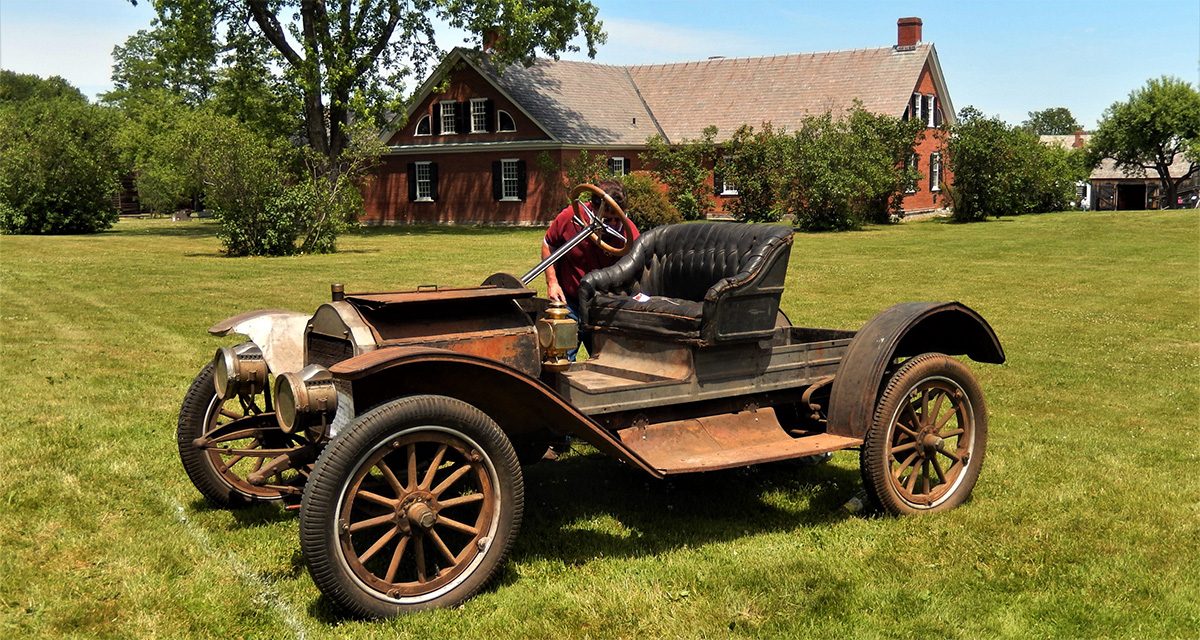 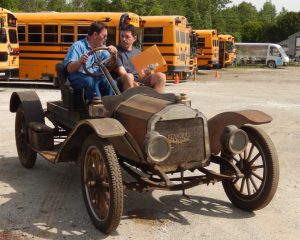 Vin Cassidy, pictured left, has had the Flanders for a number of years. Wheel Tracks understands that Vin found the chassis and running gear in Massachusetts from Carl Weber. The body was found in Iowa some seven years ago.

Vin and his family own Cassidy Bros. Forge in Rowley, Mass. where they create some of the most amazing work you can fine. Just one example is pictured here. One of the company’s long-time employees is Al Murphy and it is also Wheel Tracks understanding that Al was the main person who put all the Flanders parts and pieces together to make what you see here.

The Flanders Automobile Company was around for only three years, from 1910 to 1913, while 31,514 vehicles were built. The Flanders name comes from Walter E. Flanders (1871–1923) born March 4 in Rutland, Vermont. He was educated in Vermont and left school as a teenager to begin working as a mechanic and machinist. In 1905 he obtained a contract to produce 5,000 crankcases for Henry Ford, which lead him to a production manager job at Ford for two years. Flanders left Ford in 1908 to co-found the E-M-F Company. “E” for Barney Everitt, “M” for William Metzger for “F” for Walter Flanders. EMF autos were built from 1909 to 1912 and during the three years 49,807 vehicles were built. 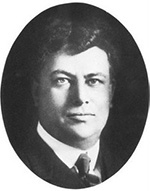 Flanders died in Newport News, Virginia and is buried at Williamsburg Memorial Park in Williamsburg. 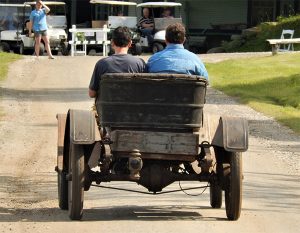 Vin Cassidy’s Flanders has a 4-cylinder L-head engine that produces 20.3 hp and was sold for $750.00 when new. The engine has two main bearings with a splash lubrication system and a 2-speed “progressive “ transmission with cone clutch. The tires are 32X3. It is called a Series 20 Runabout and weighs about 1200 pounds with a wheel base of 100 inches.

The little car was a multi-purpose vehicle, performing duties as a passenger transporter and a delivery vehicle. The body section could be removed and replaced with a slip-on fully enclosed salesman’s body. This made it very practical for all situations. 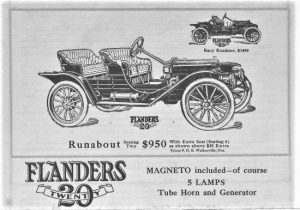 The picture left is from a 1911 advertisement.

The ad below claims the delivery wagon has a carrying space of 43 by 49 inches and is built by Studebaker. The Studebaker company distributed the Flanders automobile nation wide and eventually purchased the complete Flanders Motorcar Company.