This is part of the Corvette story written by Len Pallotto in 2005 for Wheel Tracks…. 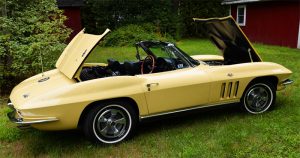 My interest in Corvettes probably started back in 1954 when some friends and I attended the General Motors Motorama Show in Boston where the highlight of the show, for me, was the fairly new Chevrolet Corvette display. However, it would be 21 years later that I would become the owner, of one of these cars.

One day a family friend, told us that a relative of his, was going to sell his 1966 Corvette convertible and asked if we might be interested. The next thing I know, the car is in our drive, with instructions to drive it a few days. This we did and after looking the car over and considering the condition of the paint and body and how badly it seemed to handle, we sent the car back and with a definite no answer.

During the time I had the car, I had rolled the driver door window down several times, the last time, the thing failed, I ended up replacing the entire assembly inside the door. (I guess you could say this was the start of the restoration of this car, though I didn’t even own it yet.) About a week later, we were on our way to the airport in Burlington, to catch a plane to Disney World with the kids. As we turned off Williston Road, parked in the lot of the gas station on the corner, was this same Corvette with a For Sale sign on it. I don’t know what sort of chemistry took place, (I think I actually felt sorry for the car, it looked like it never had any TLC) but when we arrived at the airport, I found myself in the phone booth calling the owner and telling him we would take the Corvette.

When we returned, the long road to this year started. My first project was to get the handling, to a point, where I could at the very least, keep the car in my lane of the road. Someone had put wide Craggar alloy wheels and tires on the car, which was a misfit. I replaced them with OEM wheels and tires with original wheel covers and spinners. Wow, what a difference! Little did I know this was to be the beginning of my continuing Corvette education.

I very soon learned that mid-year Corvettes have a parking brake system that was unique to them at the time. Although this design is used on many GM models currently, back then they were not compatible with Vermont weather and when they fail, the procedure in the service manual didn’t really help. When I finally was to the inside where the working parts resided, I couldn’t believe what I found; it was one solid mass of corrosion. Thankfully, I learned of a supplier who produced these parts in stainless steel. Great, the parking brake now works but the jubilation was short lived, as I found more problems, and all went down hill from there. As I drove the car, it seemed that every couple of weeks I would have to bleed the brakes. This led to research and learning, because of the design, using solid mounted calipers with constant contact pads to rotor, plus corrosion caused by moisture absorbed alcohol based brake fluid, pumps air into the system. This required a complete disassembly of all four calipers and master cylinder, which I did, and sent them to a vender to be sleeved with stainless steel. One more problem solved, but the list continued. Over the next few years I replaced ball joints, springs, shocks, stabilizer links, all front and rear rubber bushings, rotor and pads.

Since the very beginning the engine ran smoothly, but smoked moderately, however, eventually I detected a slight noise in the lower end. Before things got worse, I pulled the engine and transmission. It took a year to complete engine and transmission overhaul. A new radiator and rebuilding the wiper/washer, the carburetor, the distributor and the fuel pump was also done at this time.

During this one-year period, the inspection sticker had expired, so the day we completed the project, I made an appointment for an inspection. On the way a trooper stopped me for the expired sticker and gave me a ticket. It took a while but an assistant D.A. later dropped the charge. 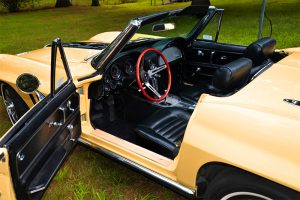 One thing that always bothered me about this car was that the electric clock never worked. So one day I took it apart and found the manufacturer’s name. To my surprise, I was able to purchase parts (at a car show). I had the face silk-screened and reinstalled it. This was great, but it made the rest of the dash look terrible. You guessed it, out came the main dash, matter of fact, out came the whole interior, seats, carpet, belts… every-thing. This was the point where we decided that we could not reinstall a new interior unless we had the body repaired and painted. Since I didn’t really have a place to do the work or the paint and my own body was now needing some restoration of it’s own, we had no choice but to have this done by an outside source. While this was being done I totally restored the seats and recovered them. In 1966 some of the options available were seat headrests and shoulder belts. These were available through Corvette restoration parts suppliers so I added these two features.

While my car was being worked on, we found the frame was very weak in some key areas, so the decision was made to remove the body and restore the frame. Again, the parts were available through suppliers.

We completed this phase of the restoration in mid May of this year (2004), as you can see, this was an on going project from day one. However, we did ,on occasion, have periods when we could drive and enjoy the car. Even when the car was off the road being worked on, we still attended Corvette shows to search for parts and network with other Corvette people to learn and exchange information. In spite of all the pitfalls, it’s been a great ride. Many thanks to my wonderful wife Jeanne, the kids Wendy and Greg, and a lot of other people, who all have either bought parts or pawed through many boxes of used parts at car shows. Thanks for just being there when I needed you for support on this project. Right now, there are left over parts still in each of our bedrooms.

Ray Tomlinson was president in 2004 and presented the Pallotta’s with the “President’s Restoration Award” that year.

That engine that was rebuilt had the factory engine pressure gauge on the dash that was fed by a tiny plastic tube from the engine. In 1984, when Greg and his date were in high school, in formal dress on their way to an event, that tiny tube burst. The engine ceased after losing its oil. A replacement 350 Chevy engine was found and installed. The car’s proper engine is a 327 and about 12 years ago, Leonard and Greg found the engine that belonged in the Corvette. It will be going into the shop soon to make the swap.

Thank you Leonard for your story. This teaches all of us who have an old car that needs “tweaking”, to have patience….. and fun, for that short time that we are in that old car’s life. Your story is why the Vermont Automobile Enthusiasts have been around sine 1953 with a very bright future. Old vehicles keeps us all young. 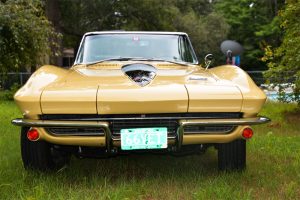 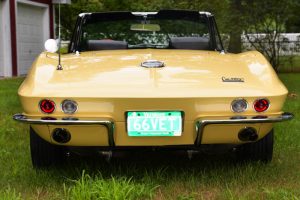