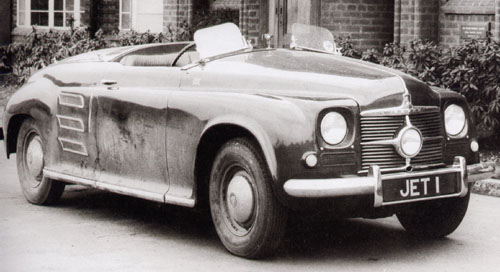 The Rover Whizzard was a turbine-engine car, and was first unveiled at Silverstone Airport, in England, in 1950. That such a conservative automaker as Rover would come out with a turbine car was a sign of the times, and in a sense, the car was a product of the transportation industry as a whole.

The question of motive power – not only for cars, but for airplanes and railroad trains – was much debated at the time. With aircraft, the advent of the turbine-jet engine promised a bright future, as jet aircraft attained previously unattainable speeds.

The automotive industry was facing a need for ever more efficient power plants that would deliver good performance even in lower-priced cars (thanks to the improvements in highways, and a post-war milieu that emphasized power and speed).

If steam pistons could be replaced with turbine blades in a locomotive, why not in an automobile engine? It would be wonderful for sales, too, directly borrowing the then-tremendous glamour of the jet aircraft as well.

Thus the impetus was supplied for Rover to design and realize a turbine engine for their Whizzard. This car represented a few modifications on the basic Rover shape of the time. The Whizzard, aka “Jet 1”, could achieve 93 mph but was gas-hungry, getting only five miles to the gallon.

Once Rover was awarded the DeWar Trophy for their engineering daring, the company went ahead with another turbine project, the “Jet 2” which featured a somewhat upgraded turbine in a sedan body that was the focus of much publicity.

In 1961 Rover brought out the T4 which seem to have borrowed much of its styling from the Citroen… Rover claimed they had almost solved the turbine problems with this car and to prove their point, ran one at Le Mans.

The T4 was the last domestic turbine car that Rover attempted… the cost of development was too high and the car’s performance did not justify its heavy fuel consumption.