Dave is taking a brake this month – An email exchange with our VAE expert on Vermont number plates.

VAE member, John Sandvil, recently purchased a Vermont number plate with # FG81. John bought it because it was different but did not know the reason for its odd number. 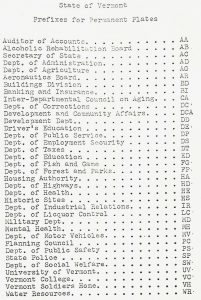 To the rescue….Gary Irish. This is part of his reply: Yes, I can tell you what it is, and will probably tell you more than you want to know! It is a plate for a state owned vehicle, and more particularly for the Fish & Game department. State vehicles were first issued special plates in 1922, and through 1925 had “STATE” written out on the bottom of the plate, similar to truck and repairer plates of that era. From 1926 to about 1950, they had an “ST” prefix, and at least from 1951, only an “S” prefix (I know 1948 had ST and 1951 had S, but don’t know about 1949 and 1950). This went through 1960, and in 1961, they issued permanent plates to state vehicles with a two letter prefix designating the department to which the vehicle was issued. These plates did not have a painted border, but somewhere around 1970, new plates were issued, essentially similar except these had a painted border. These were used until the mid-’80’s, when they transitioned over to the plates in use today. I’ve attached a few pictures to give you an idea of what they looked like. The F&G plate is probably similar to the one you are asking about. The similar one without the border is Forest & Parks. I also added a sheet that gives the meaning of the letters on the 1961 version. And by the way, the picture of the 1925 state plate may look a little odd – it is a replacement plate. These were used to replace lost plates, and were embossed with only the non-unique parts of the plate. The motor vehicle department, at that time housed in a house which once stood where the state office building is on State Street in Montpelier, had a supply of these, and when a request came in for a replacement plate, they took the appropriate blank (in this case STATE, (pictured left) but they also had them for passenger, truck, etc.) and hand painted the number on the plate in a workshop in the basement of the house and sent it out. 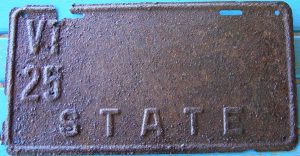 After answering your note about the license plate, I got to thinking that maybe you can answer a question for me, or at least you might know someone who can. I recently got a copy of a picture, which shows a man named Clinton Abbott in the middle of what is now Route 15 in front of the park in Underhill Flats. He was the Underhill station agent for the Burlington & Lamoille Railroad. The car has a 1911 dealer plate on it, and I was told by the person who gave me the picture that Mr. Abbott, at one time, was a dealer for Reo automobiles. From anything I can find online, this doesn’t look like a Reo, and I am wondering if you or someone might be able to tell me what make of car it is. From looking at pictures online, the closest thing seems to be a Maxwell, which has a similar shaped hood, but other details of any I could find didn’t look right, such as the cowl.

Wheel Tracks was unable to reproduce the picture that Gary Irish is referring to, but….does have a beautiful picture that can be emailed to you. There is a gentleman driving the car and two youngsters around age 10 as passengers. The Underhill church can be seen beyond the green. Please ask and I will email the photo to you. email…gafiske@gmail.com